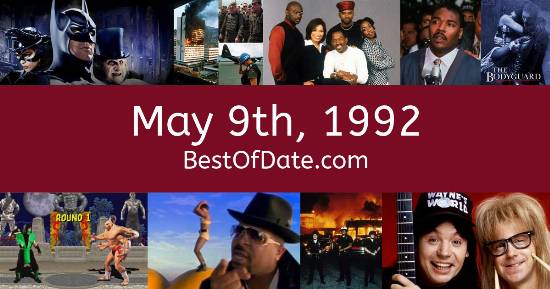 Songs that were on top of the music singles charts in the USA and the United Kingdom on May 9th, 1992.

The date is May 9th, 1992 and it's a Saturday. Anyone born today will have the star sign Taurus. Currently, people are enjoying their weekend.

George W. Bush Snr. is currently the President of the United States and the movie Basic Instinct is at the top of the Box Office. In the United Kingdom, John Major is the current Prime Minister. Texting is not a thing yet. Instead, people are using landline phones and pagers. Furthermore, the vast majority of people still have no idea what "the Internet" is.

In Europe, a war is continuing to rage on in Bosnia and Herzegovina. Lithuania, which became an independent nation after the recent collapse of the Soviet Union, has just introduced its new currency, the talonas. The riots that engulfed Los Angeles following the Rodney King verdict have recently come to an end. The riot began when four police officers accused of beating King back in 1991 were all found not guilty by a mostly-white jury, despite video evidence. Over 63 people have been left dead following the violence.

In France, 18 people have tragically lost their lives following the collapse of a terrace at a recent soccer game between SC Bastia and Olympique de Marseille. Mexican-American singer Selena has just released her album "Entre A Mi Mundo". The album contains songs such as "Como la Flor". Rapper Sir Mix-a-Lot has just released his single "Baby Got Back". The song is currently causing controversy because of its overly-sexual lyrics about women.

Meanwhile, guitarist John Frusciante has decided to leave the Red Hot Chili Peppers. In soccer, Liverpool have just won the FA Cup final after defeating Sunderland 2-0. Goals from Michael Thomas and Ian Rush were enough to seal the deal. The final episode of the popular sitcom "The Golden Girls" has just been aired on television. The show had been running for nearly seven years. This follows the "The Cosby Show", which also came to an end last month.

In music news, Ireland have just won the 1992 Eurovision Song Contest with "Why Me?" by Linda Martin. The event was held in Malmö, Sweden. If you were to travel back to this day, notable figures such as Robert Reed, Anthony Perkins, Audrey Hepburn and Thurgood Marshall would all be still alive. On TV, people are watching popular shows such as "Cheers", "Night Court", "Star Trek: The Next Generation" and "One Foot in the Grave".

Meanwhile, gamers are playing titles such as "Streets of Rage", "The Legend of Zelda: A Link to the Past", "Teenage Mutant Ninja Turtles III: The Manhattan Project" and "Street Fighter II: The World Warrior". Children and teenagers are currently watching television shows such as "The Wonder Years", "Noozles", "The Fresh Prince of Bel-Air" and "Doug". Popular toys at the moment include the likes of Pogo ball / Lolo ball, the Ghostbusters Proton Pack, Teenage Mutant Hero Turtles figures and Lego Pirates.

Notable events that occurred around May 9th, 1992.

If you are looking for some childhood nostalgia, then check out May 9th, 1998 instead.

Historical weather information for May 9th, 1992.

John Major was the Prime Minister of the United Kingdom on May 9th, 1992.

Enter your date of birth below to find out how old you were on May 9th, 1992.