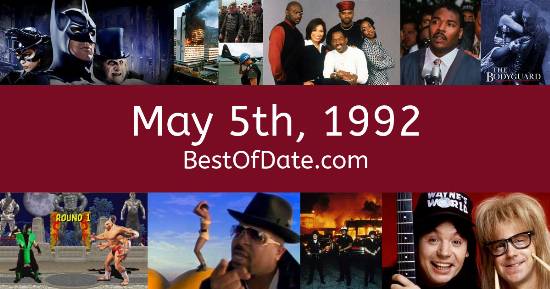 Songs that were on top of the music singles charts in the USA and the United Kingdom on May 5th, 1992.

The date is May 5th, 1992, and it's a Tuesday. Anyone born today will have the star sign Taurus. The summer of 1992 has finally arrived. The weather has warmed up and the evenings are brighter than usual.

In America, the song Jump by Kriss Kross is on top of the singles charts. Over in the UK, Please Don't Go by KWS is the number one hit song. George W. Bush Snr. is currently the President of the United States, and the movie Sleepwalkers is at the top of the Box Office.

It's 1992, so radio stations are being dominated by the likes of Kris Kross, Boyz II Men, Whitney Houston, Sir Mix-a-Lot, Right Said Fred, Snap! and Nirvana. In fashion, many of the trends from the late 80s are still in vogue. Colored tights, denim overalls, leotards, flannel shirts and shoulder pads are all fashionable at the moment. Grunge fashion has also become mainstream, popularizing band t-shirts, ripped jeans, mom jeans and Doc Martens. In television, the final episode of "The Cosby Show" has just been aired.

In Europe, a war is continuing to rage on in Bosnia and Herzegovina. Lithuania, which became an independent nation after the recent collapse of the Soviet Union, has just introduced its new currency, the talonas. The riots that engulfed Los Angeles following the Rodney King verdict have recently come to an end. The riot began when four police officers accused of beating King back in 1991 were all found not guilty by a mostly-white jury, despite video evidence. Over 63 people have been left dead following the violence.

In France, 18 people have tragically lost their lives following the collapse of a terrace at a recent soccer game between SC Bastia and Olympique de Marseille. If you were to travel back to this day, notable figures such as Robert Reed, Anthony Perkins, Audrey Hepburn and Thurgood Marshall would all be still alive. On TV, people are watching popular shows such as "Cheers", "'Allo 'Allo!", "Night Court" and "Baywatch".

Meanwhile, gamers are playing titles such as "Duck Hunt", "Paperboy", "The Simpsons: Bart vs. the Space Mutants" and "Battletoads". Kids and teenagers are watching TV shows such as "The Simpsons", "Round the Twist", "The Adventures of Pete & Pete" and "Darkwing Duck". If you're a kid or a teenager, then you're probably playing with toys such as Mr Frosty, the Ghostbusters Proton Pack, the Game Boy and the Sega Genesis / Mega Drive.

These are trending news stories and fads that were prevalent at this time. These are topics that would have been in the media on May 5th, 1992.

News stories, pop culture trends, and other events that happened around May 5th, 1992.

Check out our personality summary for people who were born on May 5th, 1992.

If you are looking for some childhood nostalgia, then you should check out May 5th, 1998, instead.

Celebrities, historical figures, and other notable people who were born on May 5th.

Historical weather information for May 5th, 1992.

Find out what your age was on May 5th, 1992, by entering your DOB below.
This information is not saved on our server.