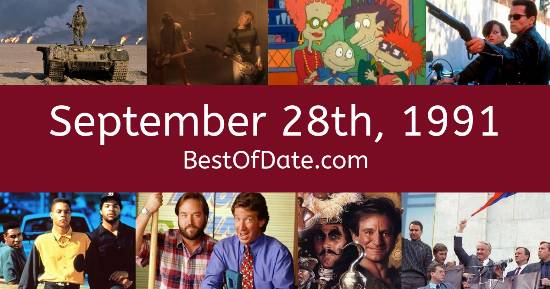 Songs that were on top of the music singles charts in the USA and the United Kingdom on September 28th, 1991:

The date is September 28th, 1991 and it's a Saturday. Anyone born today will have the star sign Libra. Currently, people are enjoying their weekend.

Schools have started back and autumn has arrived, so temperatures have started to cool and trees are beginning to shed their leaves. The earthy smells of fall have started to fill the air. In America, the song I Adore Mi Amor by Color Me Badd is on top of the singles charts.

A rock subgenre called "Grunge" is starting to rise in popularity. In Europe, the Soviet Union is continuing to dissolve. Rock band Guns N' Roses have just released their albums "Use Your Illusion I" and "Use Your Illusion II". Meanwhile, a new sitcom called "Home Improvement", starring Tim Allen, has just been aired for the first time. A new operating system call Linux has been released on the Internet.

In the Alps, a naturally-preserved mummy called "Otzi the Iceman" has just been discovered by two German tourists. In Iraq, a possible disarmament crisis is brewing. IAEA inspectors are currently being prevented from leaving a facility with files detailing Iraq's nuclear weapons program. In California, the Huntington Library has just made the Dead Sea Scrolls available to the public for the first time.

RAF pilot Jackie Mann has been released by his Lebanese kidnappers after spending more than two years in captivity. In France, Nazi war criminal Klaus Barbie has just died in prison. Tributes are pouring in for American musician Miles Davis, who has passed away at the age of 65. Davis' doctor has announced that the famous jazz trumpeter died of a stroke, pneumonia and respiratory failure.

On TV, people are watching popular shows such as "Matlock", "Seinfeld", "One Foot in the Grave" and "The Ren & Stimpy Show". Meanwhile, gamers are playing titles such as "Golden Axe", "Railroad Tycoon", "Battletoads" and "Streets of Rage". Kids and teenagers are watching TV shows such as "Teenage Mutant Ninja Turtles", "Saved by the Bell", "Rosie and Jim" and "Clarissa Explains It All".

If you're a kid or a teenager, then you're probably playing with toys such as "Micro Machines", "Jenga", "Game Boy" and "Yo-yo".

Celebrities, historical figures and noteable people who were born on the 28th of September:

Who was the Prime Minister of the United Kingdom on September 28th, 1991?

Enter your date of birth below to find out how old you were on September 28th, 1991.

Looking for some nostalgia? Here are some Youtube videos relating to September 28th, 1991. Please note that videos are automatically selected by Youtube and that results may vary! Click on the "Load Next Video" button to view the next video in the search playlist. In many cases, you'll find episodes of old TV shows, documentaries, music videos and soap dramas.

Here are some fun statistics about September 28th, 1991.