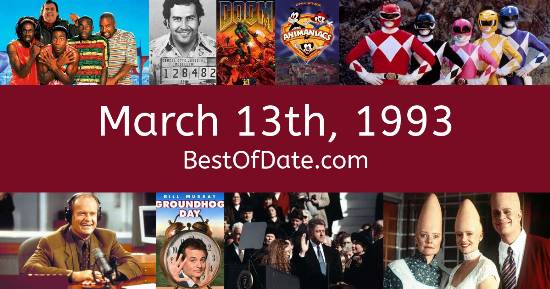 These songs were on top of the music charts in the United States and the United Kingdom on March 13th, 1993.

The movie "CB4" was at the top of the Box Office on this day.

The date is March 13th, 1993, and it's a Saturday. Anyone born today will have the star sign Pisces. Currently, people are enjoying their weekend.

Spring has started to creep in and the days are beginning to get longer. In America, the song A Whole New World by Peabo Bryson & Regina Belle is on top of the singles charts. Over in the UK, No Limit by No Unlimited is the number one hit song.

Bill Clinton is currently the President of the United States, and the movie CB4 is at the top of the Box Office. In the United Kingdom, John Major is the current Prime Minister. Texting is not a thing yet. Instead, people are using landline phones and pagers. Furthermore, the vast majority of people still have no idea what "the Internet" is.

In television news, a new animated series called "Beavis and Butt-Head" has made its debut on MTV. In Florida, an American physician called Dr. David Gunn has been shot dead outside his clinic by an anti-abortionist named Michael F. Griffin. Wrestling fans are currently in shock at the recent news that former WWF star "Dino Bravo" has been found murdered at his home in Quebec, Canada.

At a compound in Waco, Texas, a standoff is still ongoing between the FBI and a religious sect called the Branch Davidians. A massive snowstorm is currently impacting 26 states across the USA. As a result, airports have been forced to closed and over 10 million homes have been left without power. If you were to travel back to this day, notable figures such as Brandon Lee, Conway Twitty, Dražen Petrović and Pat Nixon would all be still alive.

On TV, people are watching popular shows such as "Cheers", "Family Matters", "Dinosaurs" and "Martin". Meanwhile, gamers are playing titles such as "Paperboy", "Super Mario Kart", "Mortal Kombat" and "X-Men". Children and teenagers are currently watching television shows such as "Clarissa Explains It All", "Dinosaurs", "Rugrats" and "The Animals of Farthing Wood".

Popular toys at the moment include the likes of Micro Machines, the Game Boy, Nerf Blaster and the Talkboy.

These are trending news stories and fads that were prevalent at this time. These are topics that would have been in the media on March 13th, 1993.

News stories and other events that happened around March 13th, 1993.

Check out our personality summary for people who were born on March 13th, 1993.

If you are looking for some childhood nostalgia, then you should check out March 13th, 1999 instead.

Celebrities, historical figures and other notable people who were born on March 13th.

Bill Clinton was the President of the United States on March 13th, 1993.

John Major was the Prime Minister of the United Kingdom on March 13th, 1993.

Find out what your age was on March 13th, 1993, by entering your DOB below.
This information is not saved on our server.