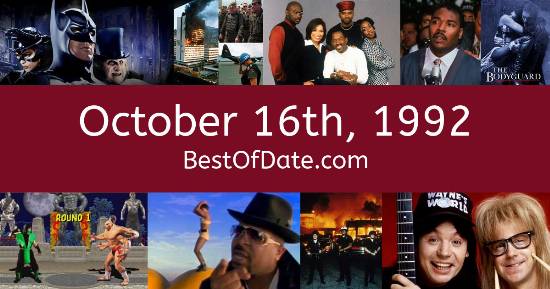 Songs that were on top of the music singles charts in the USA and the United Kingdom on October 16th, 1992.

The date is October 16th, 1992 and it's a Friday. Anyone born today will have the star sign Libra. Currently, people have "that Friday feeling" and are looking forward to the weekend.

Over in the UK, Sleeping Satellite by Tasmin Archer is the number one hit song. George W. Bush Snr. is currently the President of the United States and the movie The Last of the Mohicans is at the top of the Box Office. In the United Kingdom, John Major is the current Prime Minister.

In fashion, many of the trends from the late 80s are still in vogue. Colored tights, denim overalls, leotards, flannel shirts and shoulder pads are all fashionable at the moment. Grunge fashion has also become mainstream, popularizing band t-shirts, ripped jeans, mom jeans and Doc Martens. In Europe, a war is continuing to rage on in Bosnia and Herzegovina. In the United States, the campaign for the 1992 presidential election is in full swing, with Democratic Party nominee Bill Clinton taking on Republican incumbent George H. W. Bush.

A new horror movie called "Candyman" has just been released in movie theaters. Irish singer Sinéad O'Connor is continuing to receive backlash over her decision to rip up a photograph of the Pope on Saturday Night Live earlier this month. At a tribute concert for Bob Dylan, O'Connor is booed by many members of the audience. If you were to travel back to this day, notable figures such as Audrey Hepburn, Thurgood Marshall, Andre the Giant and Bobby Moore would all be still alive.

On TV, people are watching popular shows such as "Cheers", "In the Heat of the Night", "One Foot in the Grave" and "Home Improvement". Meanwhile, gamers are playing titles such as "Duck Hunt", "Street Fighter II: The World Warrior", "The Legend of Zelda: A Link to the Past" and "Super Mario Kart". Kids and teenagers are watching TV shows such as "Alvin and the Chipmunks", "Garfield and Friends", "Mr. Bean" and "Round the Twist".

Popular toys at the moment include the likes of Screwball Scramble, Mr Frosty, Koosh Ball and Super Soaker (water gun).

If you are looking for some childhood nostalgia, then check out October 16th, 1998 instead.

George W. Bush Snr. was the President of the United States on October 16th, 1992.

John Major was the Prime Minister of the United Kingdom on October 16th, 1992.

Enter your date of birth below to find out how old you were on October 16th, 1992.

Here are some fun statistics about October 16th, 1992.