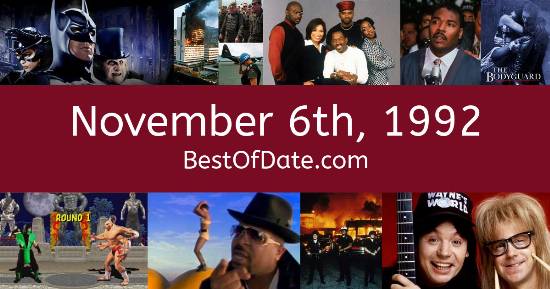 Songs that were on top of the music singles charts in the USA and the United Kingdom on November 6th, 1992.

The date is November 6th, 1992 and it's a Friday. Anyone born today will have the star sign Scorpio. Currently, people have "that Friday feeling" and are looking forward to the weekend.

It's November, so the evenings are getting darker and the days are getting colder. The song End Of The Road by Boyz II Men is on top of the singles charts in both the USA and the United Kingdom. George W. Bush Snr. is currently the President of the United States and the movie Passenger 57 is at the top of the Box Office.

American rock band Rage Against the Machine have just released their controversial new single "Killing in the Name". In US politics, Democratic Party nominee Bill Clinton has just been elected as the new president of the United States. Clinton defeated Republican incumbent George H. W. Bush by a wide margin. Whitney Houston has released her new single "I Will Always Love You". The song was recorded for the soundtrack to The Bodyguard.

In basketball, a new player called Shaquille O'Neal has made his NBA debut for the Orlando Magic. Meanwhile, the breakdown of Prince Charles' and Princess Diana's relationship is continuing to receive widespread media attention. Following the recent release of leaked phone calls and details about the pair having extramarital affairs, the Royal Palace has been forced to officially admit that there is a rift between the two. If you were to travel back to this day, notable figures such as Audrey Hepburn, Thurgood Marshall, Andre the Giant and Bobby Moore would all be still alive.

On TV, people are watching popular shows such as "Only Fools and Horses", "Sherlock Holmes", "Murder, She Wrote" and "Quantum Leap". Meanwhile, gamers are playing titles such as "Ecco the Dolphin", "Kirby's Dream Land", "Super Star Wars" and "Super Mario Land 2: 6 Golden Coins". Kids and teenagers are watching TV shows such as "The Adventures of Pete & Pete", "The Adventures of Tintin", "Barney & Friends" and "X-Men: The Animated Series".

If you are looking for some childhood nostalgia, then check out November 6th, 1998 instead.

Actress and model. Deceased
Born on November 6th, 1967
She was not alive on this date.

George W. Bush Snr. was the President of the United States on November 6th, 1992.

John Major was the Prime Minister of the United Kingdom on November 6th, 1992.

Enter your date of birth below to find out how old you were on November 6th, 1992.

Here are some fun statistics about November 6th, 1992.

Have something to say about November 6th, 1992?