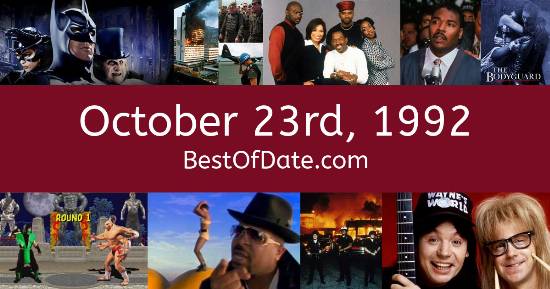 Songs that were on top of the music singles charts in the USA and the United Kingdom on October 23rd, 1992.

The date is October 23rd, 1992 and it's a Friday. Anyone born today will have the star sign Scorpio. Currently, people have "that Friday feeling" and are looking forward to the weekend.

The summer is long gone. Temperatures have started to become much cooler and the evenings are beginning to get darker. Fallen leaves have carpeted driveways, lawns, pathways and sidewalks and there's a fresh earthy scent in the ear. Halloween of 1992 is quickly approaching and stores are selling costumes and decorations.

In America, the song End Of The Road by Boyz II Men is on top of the singles charts. Over in the UK, Sleeping Satellite by Tasmin Archer is the number one hit song. George W. Bush Snr. is currently the President of the United States and the movie The Last of the Mohicans is at the top of the Box Office.

In the United States, the campaign for the 1992 presidential election is in full swing, with Democratic Party nominee Bill Clinton taking on Republican incumbent George H. W. Bush. Irish singer Sinéad O'Connor is continuing to receive backlash over her decision to rip up a photograph of the Pope on Saturday Night Live earlier this month. At a tribute concert for Bob Dylan, O'Connor is booed by many members of the audience. A new horror movie called "Candyman" has just been released in movie theaters. Meanwhile, Quentin Tarantino's movie "Reservoir Dogs" has also hit the big screen.

If you were to travel back to this day, notable figures such as Audrey Hepburn, Thurgood Marshall, Andre the Giant and Bobby Moore would all be still alive. On TV, people are watching popular shows such as "Murder, She Wrote", "Matlock", "Home Improvement" and "Martin". Meanwhile, gamers are playing titles such as "Duck Hunt", "Paperboy", "Super Castlevania IV" and "Mortal Kombat".

Kids and teenagers are watching TV shows such as "The Smurfs", "Alvin and the Chipmunks", "Dink, the Little Dinosaur" and "Hangin' with Mr. Cooper". If you're a kid or a teenager, then you're probably playing with toys such as Micro Machines, the Ghostbusters Proton Pack, the SEGA Game Gear and Mighty Max.

If you are looking for some childhood nostalgia, then check out October 23rd, 1998 instead.

Soccer player.
Born on October 23rd, 1993
He was born exactly one year after this date.

Actress.
Born on October 23rd, 1998
She was born exactly 6 years after this date.

George W. Bush Snr. was the President of the United States on October 23rd, 1992.

John Major was the Prime Minister of the United Kingdom on October 23rd, 1992.

Enter your date of birth below to find out how old you were on October 23rd, 1992.

Here are some fun statistics about October 23rd, 1992.