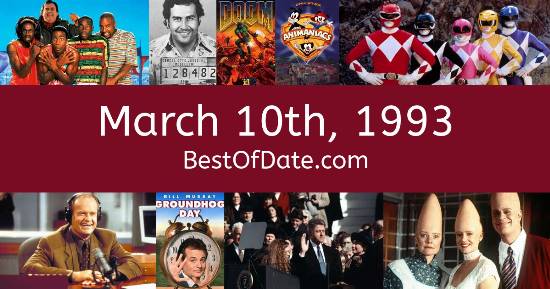 Songs that were on top of the music singles charts in the USA and the United Kingdom on March 10th, 1993.

The date is March 10th, 1993 and it's a Wednesday. Anyone born today will have the star sign Pisces. Spring has started to creep in and the days are beginning to get longer.

In America, the song A Whole New World by Peabo Bryson & Regina Belle is on top of the singles charts. Over in the UK, No Limit by No Unlimited is the number one hit song. Bill Clinton is currently the President of the United States and the movie Falling Down is at the top of the Box Office.

In New York City, a recent terrorist bombing underneath the North Tower of the World Trade Center has left seven people dead, including an unborn baby. A man called Mohammed A. Salameh has been arrested on suspicion of carrying out the attack. In television news, a new animated series called "Beavis and Butt-Head" has made its debut on MTV. In Florida, an American physician called Dr. David Gunn has been shot dead outside his clinic by an anti-abortionist named Michael F. Griffin.

Wrestling fans are currently in shock at the recent news that former WWF star "Dino Bravo" has been found murdered at his home in Quebec, Canada. At a compound in Waco, Texas, a standoff is still ongoing between the FBI and a religious sect called the Branch Davidians. On TV, people are watching popular shows such as "Beverly Hills, 90210", "The Ren & Stimpy Show", "Melrose Place" and "Mad About You".

Meanwhile, gamers are playing titles such as "Wolfenstein 3D", "Ecco the Dolphin", "Sonic the Hedgehog 2" and "FIFA International Soccer". Kids and teenagers are watching TV shows such as "Garfield and Friends", "Saved by the Bell", "Blossom" and "Are You Afraid of the Dark?". Popular toys at the moment include the likes of Jenga, G.I. Joe (figures), Mighty Max and the Talkboy.

Bill Clinton was the President of the United States on March 10th, 1993.

John Major was the Prime Minister of the United Kingdom on March 10th, 1993.

Enter your date of birth below to find out how old you were on March 10th, 1993.

Leave a comment and tell everyone why March 10th, 1993 is important to you.