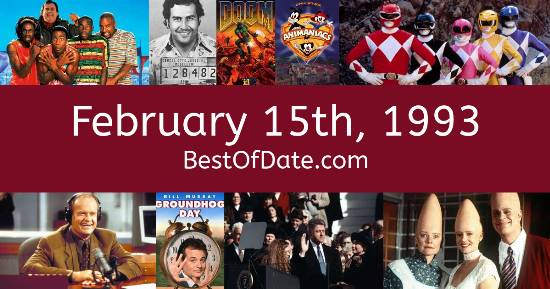 These songs were on top of the music charts in the United States and the United Kingdom on February 15th, 1993.

The movie "Loaded Weapon 1" was at the top of the Box Office on this day.

The date is February 15th, 1993, and it's a Monday. Anyone born today will have the star sign Aquarius. Valentine's Day of 1993 has just passed.

In America, the song I Will Always Love You by Whitney Houston is on top of the singles charts. Over in the UK, No Limit by No Unlimited is the number one hit song. Bill Clinton is currently the President of the United States, and the movie Loaded Weapon 1 is at the top of the Box Office.

A playing discs game called "Pogs" is currently spreading in popularity throughout the world. It's 1993, so radio stations are being dominated by the likes of Meat Loaf, UB40, Snow, Haddaway, Whitney Houston, Take That, Janet Jackson and Mariah Carey. A recent interview between Oprah Winfrey and pop star Michael Jackson has become one of the most watched interviews in TV history. This is Jackson's first interview in over a decade.

A new film called Groundhog Day, starring Bill Murray, has just been released in movie theaters. Former English footballer Bobby Moore has recently announced to the media that he is suffering from bowel and liver cancer. People are currently shocked by the news that missing 2-year-old James Bulger has been found murdered in Merseyside, England.

If you were to travel back to this day, notable figures such as Bobby Moore, Brandon Lee, Conway Twitty and Dražen Petrović would all be still alive. On TV, people are watching popular shows such as "Sherlock Holmes", "Roseanne", "Baywatch" and "Dr. Quinn, Medicine Woman". Meanwhile, gamers are playing titles such as "Yoshi", "Kirby's Dream Land", "Mortal Kombat" and "Super Star Wars".

Children and teenagers are currently watching television shows such as "Roseanne", "Doogie Howser, M.D.", "Dinosaurs" and "Rugrats". Popular toys at the moment include the likes of the Easy-Bake Oven, Micro Machines, Teenage Mutant Hero Turtles figures and Nerf Blaster.

These are trending news stories and fads that were prevalent at this time. These are topics that would have been in the media on February 15th, 1993.

News stories and other events that happened around February 15th, 1993.

Check out our personality summary for people who were born on February 15th, 1993.

If you are looking for some childhood nostalgia, then you should check out February 15th, 1999 instead.

Twitch streamer.
Born on February 15th, 1994
He was born exactly one year after this date.

Bill Clinton was the President of the United States on February 15th, 1993.

John Major was the Prime Minister of the United Kingdom on February 15th, 1993.

Find out what your age was on February 15th, 1993, by entering your DOB below.
This information is not saved on our server.

Here are some fun statistics about February 15th, 1993.