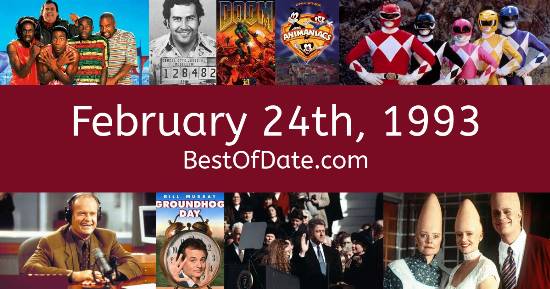 On February 24th, 1993, the following songs were at the top of the music charts in the USA and the UK.

The date is February 24th, 1993, and it's a Wednesday. Anyone born today will have the star sign Pisces. In America, the song I Will Always Love You by Whitney Houston is on top of the singles charts.

Over in the UK, No Limit by No Unlimited is the number one hit song. Bill Clinton is currently the President of the United States, and the movie Groundhog Day is at the top of the Box Office. In the United Kingdom, John Major is the current Prime Minister.

It's 1993, so radio stations are being dominated by the likes of Meat Loaf, UB40, Snow, Haddaway, Whitney Houston, Take That, Janet Jackson and Mariah Carey. People are currently shocked by the recent murder of 2-year-old James Bulger in Merseyside, England. Two 10-year-old boys called Robert Thompson and Jon Venables, who are currently being referred to as Child A and Child B, have since been charged with the crime. Last week, they were remanded in custody to await trial. In Canada, Prime Minister Brian Mulroney has just announced his resignation.

The world of soccer is paying tribute to English football legend Bobby Moore, who has recently passed away at the age of 51 from cancer. If you were to travel back to this day, notable figures such as Bobby Moore, Brandon Lee, Conway Twitty and Dražen Petrović would all be still alive. On TV, people are watching popular shows such as "Knots Landing", "Star Trek: The Next Generation", "One Foot in the Grave" and "Mad About You".

Meanwhile, gamers are playing titles such as "Street Fighter II: The World Warrior", "Road Rash II", "Yoshi" and "FIFA International Soccer". Children and teenagers are currently watching television shows such as "Art Attack", "Clarissa Explains It All", "The Little Mermaid" and "Hangin' with Mr. Cooper". If you're a kid or a teenager, then you're probably playing with toys such as Sylvanian Families, Polly Pocket, Lego Pirates and the Talkboy.

These are trending news stories and fads that were prevalent at this time. These are topics that would have been in the media on February 24th, 1993.

Check out our personality summary for people who were born on February 24th, 1993.

If you are looking for some childhood nostalgia, then you should check out February 24th, 1999 instead.

Bill Clinton was the President of the United States on February 24th, 1993.

John Major was the Prime Minister of the United Kingdom on February 24th, 1993.

Enter your date of birth below to find out how old you were on February 24th, 1993.
This information is not transmitted to our server.

Here are some fun statistics about February 24th, 1993.