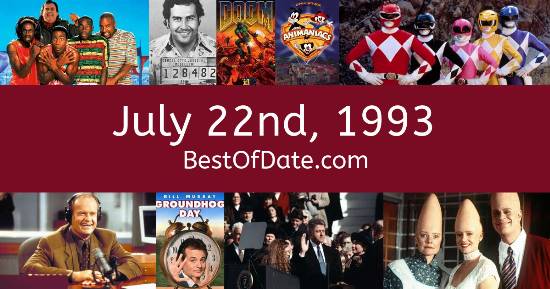 Songs that were on top of the music singles charts in the USA and the United Kingdom on July 22nd, 1993.

The date is July 22nd, 1993 and it's a Thursday. Anyone born today will have the star sign Cancer. It's summer, so the temperatures are warmer and the evenings are longer than usual.

In America, the song Weak by SWV is on top of the singles charts. Over in the UK, Pray by Take That is the number one hit song. Bill Clinton is currently the President of the United States and the movie The Firm is at the top of the Box Office.

It's 1993, so radio stations are being dominated by the likes of Meat Loaf, UB40, Snow, Haddaway, Whitney Houston, Take That, Janet Jackson and Mariah Carey. The films "Free Willy" and "Hocus Pocus" have just been released in movie theaters. In music news, rock band "Rage Against the Machine" have recently sparked controversy by staging a nude protest at the Lollapalooza concert in Philadelphia. The band's protest was in response to their song "Killing in the Name" being banned from radio stations.

On TV, people are watching popular shows such as "Seinfeld", "Beverly Hills, 90210", "The Ren & Stimpy Show" and "Batman: The Animated Series". Meanwhile, gamers are playing titles such as "Mortal Kombat", "FIFA International Soccer", "Syndicate" and "Shinobi III: Return of the Ninja Master". Kids and teenagers are watching TV shows such as "Married... with Children", "Full House", "The Simpsons" and "Clarissa Explains It All".

If you're a kid or a teenager, then you're probably playing with toys such as the Easy-Bake Oven, Yo-yo, G.I. Joe (figures) and the Talkboy.

If you are looking for some childhood nostalgia, then check out July 22nd, 1999 instead.

Celebrities, historical figures and notable people who were born on the 22nd of July.

Bill Clinton was the President of the United States on July 22nd, 1993.

John Major was the Prime Minister of the United Kingdom on July 22nd, 1993.