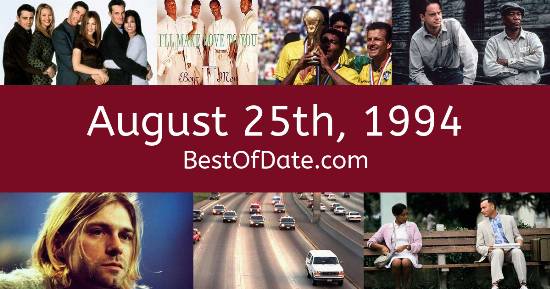 Songs that were on top of the music singles charts in the USA and the United Kingdom on August 25th, 1994.

The date is August 25th, 1994 and it's a Thursday. Anyone born today will have the star sign Virgo. The summer of 1994 is coming to an end and fall is just around the corner.

In Europe, a war is continuing to rage on in Bosnia and Herzegovina. In Ireland, gangland figure Martin Cahill (The General) has recently been assassinated outside of his home in Swan Grove, Ranelagh. On TV, people are watching popular shows such as "Only Fools and Horses", "One Foot in the Grave", "X-Men" and "Mighty Morphin Power Rangers".

Meanwhile, gamers are playing titles such as "Shinobi III: Return of the Ninja Master", "Gunstar Heroes", "NBA Jam" and "Doom". Children and teenagers are currently watching television shows such as "Full House", "Teenage Mutant Ninja Turtles", "The Fresh Prince of Bel-Air" and "Biker Mice from Mars". Popular toys at the moment include the likes of Polly Pocket, Yo-yo, Nerf Blaster and Mighty Max.

Celebrities, historical figures and notable people who were born on the 25th of August.

Bill Clinton was the President of the United States on August 25th, 1994.

John Major was the Prime Minister of the United Kingdom on August 25th, 1994.

Enter your date of birth below to find out how old you were on August 25th, 1994.

Leave a comment and tell everyone why August 25th, 1994 is important to you.