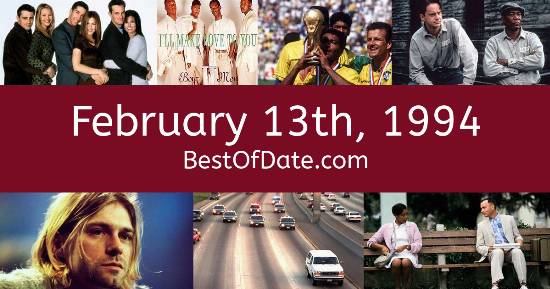 Songs that were on top of the music singles charts in the USA and the United Kingdom on February 13th, 1994:

The date is February 13th, 1994 and it's a Sunday. Anyone born today will have the star sign Aquarius. Currently, people are enjoying their weekend.

Valentine's Day is just around the corner. In America, the song All For Love by Bryan Adams, Rod Stewart & Sting is on top of the singles charts. Over in the UK, Things Can Only Get Better by D:ream is the number one hit song.

Bill Clinton is currently the President of the United States and the movie Ace Ventura: Pet Detective is at the top of the Box Office. In the United Kingdom, John Major is the current Prime Minister. In fashion, "grunge" clothing has declined in popularity and women are beginning to wear form-fitting outfits such as slip dresses and pencil skirts. Movies such as Clueless and The Craft have popularized the "sexy school girl" look.

It's 1994, so radio stations are being dominated by the likes of All-4-One, Boyz II Men, R. Kelly, Céline Dion, Bruce Springsteen, Bryan Adams, Meat Loaf, Bon Jovi, Wet Wet Wet, Rednex and Mariah Carey. In Europe, a war is continuing to rage on in Bosnia and Herzegovina. Recently, 68 people were killed when the Bosnian Serb Army fired a mortar shell at an open air market place in Sarajevo. The 1994 Winter Olympics are currently taking place in Lillehammer, Norway. On the same day that the games started, Edvard Munch's painting "The Scream" was stolen from the National Gallery in Oslo.

People are watching popular TV shows such as "Married... with Children", "Family Matters", "The Fresh Prince of Bel-Air" and "Walker, Texas Ranger". Meanwhile, gamers are playing titles such as "Syndicate", "Myst", "NBA Jam" and "Disney's Aladdin". Children and teenagers are currently watching television shows such as "Full House", "The Fresh Prince of Bel-Air", "Beverly Hills, 90210" and "The Animals of Farthing Wood".

Celebrities and historical figures that were born on the 13th of February:

Who was the Prime Minister of the United Kingdom on February 13th, 1994?

Enter your date of birth below to find out how old you were on February 13th, 1994.

Looking for some nostalgia? Here are some Youtube videos relating to February 13th, 1994. Please note that videos are automatically selected by Youtube and that results may vary! Click on the "Load Next Video" button to view the next video in the search playlist. In many cases, you'll find episodes of old TV shows, documentaries, music videos and soap dramas.

Here are some fun statistics about February 13th, 1994.