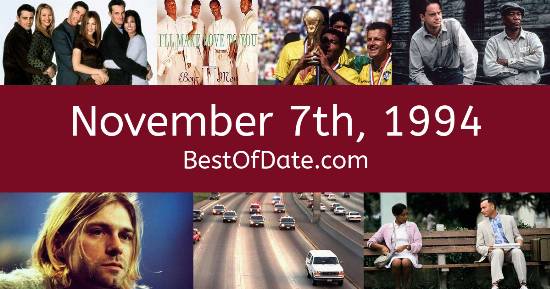 Songs that were on top of the music singles charts in the USA and the United Kingdom on November 7th, 1994.

The date is November 7th, 1994 and it's a Monday. Anyone born today will have the star sign Scorpio. It's November, so the evenings are getting darker and the days are getting colder.

In America, the song I'll Make Love To You by Boyz II Men is on top of the singles charts. Over in the UK, Baby Come Back by Pato Banton is the number one hit song. Bill Clinton is currently the President of the United States and the movie Stargate is at the top of the Box Office.

In Europe, a war is continuing to rage on in Bosnia and Herzegovina. On Nickelodeon, a new cartoon called "Aaahh!!! Real Monsters" has recently been aired for the first time. It has been announced that former U.S. President Ronald Reagan is suffering from Alzheimer's disease. Meanwhile, in boxing news, George Foreman has become the oldest heavyweight champion in history after defeating Michael Moorer.

On TV, people are watching popular shows such as "Last of the Summer Wine", "Blossom", "Rugrats" and "Friends". Meanwhile, gamers are playing titles such as "Shinobi III: Return of the Ninja Master", "Doom", "Earthworm Jim" and "Donkey Kong Country". Children and teenagers are currently watching television shows such as "Doug", "Living Single", "Rocko's Modern Life" and "Sweet Valley High".

If you're a kid or a teenager, then you're probably playing with toys such as Jenga, Nerf Blaster, Mighty Max and Sky Dancers.

Celebrities, historical figures and notable people who were born on the 7th of November.

Bill Clinton was the President of the United States on November 7th, 1994.

John Major was the Prime Minister of the United Kingdom on November 7th, 1994.

Enter your date of birth below to find out how old you were on November 7th, 1994.

Here are some fun statistics about November 7th, 1994.

Leave a comment and tell everyone why November 7th, 1994 is important to you.