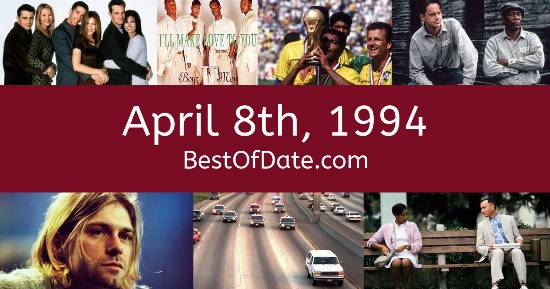 Songs that were on top of the music singles charts in the USA and the United Kingdom on April 8th, 1994:

The date is April 8th, 1994 and it's a Friday. Anyone born today will have the star sign Aries. Currently, people have "that Friday feeling" and are looking forward to the weekend.

The summer of 1994 is drawing closer and temperatures have started to rise. In America, the song The Sign by Ace of Base is on top of the singles charts. Over in the UK, Doop by Doop is the number one hit song.

Bill Clinton is currently the President of the United States and the movie D2: The Mighty Ducks is at the top of the Box Office. In the United Kingdom, John Major is the current Prime Minister. In fashion, "grunge" clothing has declined in popularity and women are beginning to wear form-fitting outfits such as slip dresses and pencil skirts. Movies such as Clueless and The Craft have popularized the "sexy school girl" look.

On the continent of Africa, a horrible event is unfolding, as the Hutu majority in Rwanda attempt to wipe out the Tutsi minority. This genocide began following the assassination of President Juvenal Habyarimana. Meanwhile, in celebrity news, "Beverly Hills, 90210" actress Shannen Doherty has filed for divorce from actor Ashley Hamilton after less than a year of marriage. People are currently shocked by the news that Nirvana lead singer Kurt Cobain has been found dead at his home in Lake Washington, Seattle. His death has been declared a suicide. It is believed that Cobain may have been dead for a couple of days before his body was discovered.

On TV, people are watching popular shows such as "Martin", "Mad About You", "The X-Files" and "Boy Meets World". Meanwhile, gamers are playing titles such as "Mortal Kombat II", "Myst", "Disney's Aladdin" and "Super Metroid". Kids and teenagers are watching TV shows such as "Rosie and Jim", "Batman: The Animated Series", "Bill Nye the Science Guy" and "Tales from the Cryptkeeper".

Who was the Prime Minister of the United Kingdom on April 8th, 1994?

Enter your date of birth below to find out how old you were on April 8th, 1994.

Looking for some nostalgia? Here are some Youtube videos relating to April 8th, 1994. Please note that videos are automatically selected by Youtube and that results may vary! Click on the "Load Next Video" button to view the next video in the search playlist. In many cases, you'll find episodes of old TV shows, documentaries, music videos and soap dramas.

Here are some fun statistics about April 8th, 1994.