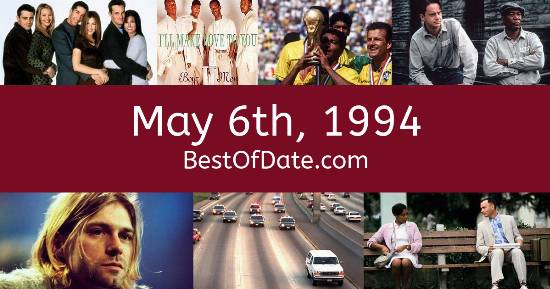 Songs that were on top of the music singles charts in the USA and the United Kingdom on May 6th, 1994.

The date is May 6th, 1994 and it's a Friday. Anyone born today will have the star sign Taurus. Currently, people have "that Friday feeling" and are looking forward to the weekend.

The summer of 1994 has finally arrived. The weather has warmed up and the evenings are brighter than usual. In America, the song Bump N' Grind by R. Kelly is on top of the singles charts. Over in the UK, The Most Beautiful Girl In The World by Symbol is the number one hit song.

Bill Clinton is currently the President of the United States and the movie With Honors is at the top of the Box Office. In the United Kingdom, John Major is the current Prime Minister. In fashion, "grunge" clothing has declined in popularity and women are beginning to wear form-fitting outfits such as slip dresses and pencil skirts. Movies such as Clueless and The Craft have popularized the "sexy school girl" look.

Formula One racing driver Ayrton Senna has died following an accident at the San Marino Grand Prix. He was only 34 years old. In soccer, Manchester United have won the Premier League for the second season in a row. Their title win was confirmed after rivals Blackburn Rovers lost 2-1 against Coventry. Meanwhile, the Channel Tunnel between the United Kingdom and France has been officially opened to the public. The opening follows six years of construction that began in 1988.

On TV, people are watching popular shows such as "Full House", "Clarissa Explains It All", "Mighty Morphin Power Rangers" and "The Nanny". Meanwhile, gamers are playing titles such as "Syndicate", "NBA Jam", "Doom" and "Super Metroid". Children and teenagers are currently watching television shows such as "Mister Rogers' Neighborhood", "Garfield and Friends", "Rugrats" and "Doug".

If you're a kid or a teenager, then you're probably playing with toys such as the Easy-Bake Oven, Yo-yo, Pogs and Mighty Max.

Notable events that occurred around May 6th, 1994.

Historical weather information for May 6th, 1994.

Bill Clinton was the President of the United States on May 6th, 1994.

John Major was the Prime Minister of the United Kingdom on May 6th, 1994.

Enter your date of birth below to find out how old you were on May 6th, 1994.

Leave a comment and tell everyone why May 6th, 1994 is important to you.