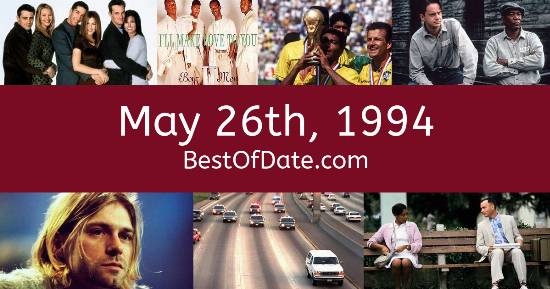 Songs that were on top of the music singles charts in the USA and the United Kingdom on May 26th, 1994:

The date is May 26th, 1994 and it's a Thursday. Anyone born today will have the star sign Gemini. The summer of 1994 has finally arrived. The weather has warmed up and the evenings are brighter than usual.

In America, the song I Swear by All-4-One is on top of the singles charts. Over in the UK, Come On You Reds by Manchester United FC & Status Quo is the number one hit song. Bill Clinton is currently the President of the United States and the movie Maverick is at the top of the Box Office.

In Europe, a war is continuing to rage on in Bosnia and Herzegovina. On the continent of Africa, a horrible event is unfolding, as the Hutu majority in Rwanda attempt to wipe out the Tutsi minority. This genocide began following the assassination of President Juvenal Habyarimana. Tributes are currently pouring in for Former First Lady Jackie Kennedy, who has passed away from non-Hodgkin lymphoma at the age of 64. Kennedy, who was married to President John F. Kennedy, had only publicly announced her diagnosis back in January.

The final episode of "Star Trek: The Next Generation" has just been aired on television. The action comedy film "Beverly Hills Cop III", starring Eddie Murphy, has just been released in movie theaters. In celebrity news, pop star Michael Jackson has married Elvis' daughter Lisa Marie Presley. The media is currently speculating whether or not the marriage is a publicity stunt.

On TV, people are watching popular shows such as "Full House", "The Fresh Prince of Bel-Air", "Beverly Hills, 90210" and "Dinosaurs". Meanwhile, gamers are playing titles such as "Syndicate", "Gunstar Heroes", "Disney's Aladdin" and "Super Metroid". Children and teenagers are currently watching television shows such as "Are You Afraid of the Dark?", "Dinosaurs", "X-Men: The Animated Series" and "Rocko's Modern Life".

If you're a kid or a teenager, then you're probably playing with toys such as "Sylvanian Families", "G.I. Joe (figures)", "Pogs" and "Nerf Blaster".

Notable events that occurred around May 26th, 1994:

Celebrities, historical figures and noteable people who were born on the 26th of May:

Who was the Prime Minister of the United Kingdom on May 26th, 1994?

Looking for some nostalgia? Here are some Youtube videos relating to May 26th, 1994. Please note that videos are automatically selected by Youtube and that results may vary! Click on the "Load Next Video" button to view the next video in the search playlist. In many cases, you'll find episodes of old TV shows, documentaries, music videos and soap dramas.