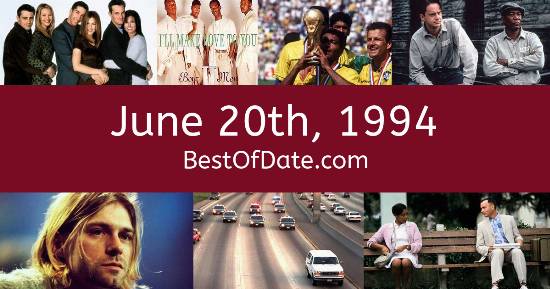 Songs that were on top of the music singles charts in the USA and the United Kingdom on June 20th, 1994.

The date is June 20th, 1994 and it's a Monday. Anyone born today will have the star sign Gemini. It's summer, so the temperatures are warmer and the evenings are longer than usual.

In America, the song I Swear by All-4-One is on top of the singles charts. Over in the UK, Love Is All Around by Wet Wet Wet is the number one hit song. Bill Clinton is currently the President of the United States and the movie Wolf is at the top of the Box Office.

In the United States, the 1994 FIFA World Cup is being held. Former NFL star O.J. Simpson has pleaded "Not Guilty" to the murders of Nicole Brown Simpson and Ronald Goldman. A couple of days ago, Simpson was arrested for the murders after he led police in Los Angeles on a highly-televised chase in his white Ford Bronco. On TV, people are watching popular shows such as "Only Fools and Horses", "Matlock", "The X-Files" and "Frasier".

Meanwhile, gamers are playing titles such as "Gunstar Heroes", "Myst", "Disney's Aladdin" and "Doom". Kids and teenagers are watching TV shows such as "Teenage Mutant Ninja Turtles", "Blossom", "Beverly Hills, 90210" and "Tales from the Cryptkeeper". Popular toys at the moment include the likes of Micro Machines, Polly Pocket, Pogs and Littlest Pet Shop.

If you are looking for some childhood nostalgia, then check out June 20th, 2000 instead.

Bill Clinton was the President of the United States on June 20th, 1994.

John Major was the Prime Minister of the United Kingdom on June 20th, 1994.