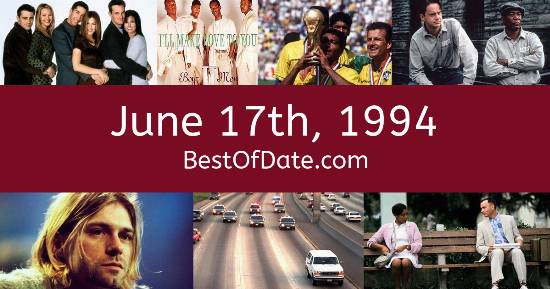 Songs that were on top of the music singles charts in the USA and the United Kingdom on June 17th, 1994:

The date is June 17th, 1994 and it's a Friday. Anyone born today will have the star sign Gemini. Currently, people have "that Friday feeling" and are looking forward to the weekend.

Bill Clinton is currently the President of the United States and the movie Wolf is at the top of the Box Office. In the United Kingdom, John Major is the current Prime Minister. In fashion, "grunge" clothing has declined in popularity and women are beginning to wear form-fitting outfits such as slip dresses and pencil skirts. Movies such as Clueless and The Craft have popularized the "sexy school girl" look.

In the United States, the 1994 FIFA World Cup is being held. Former NFL star O.J. Simpson has been arrested for the murders of Nicole Brown Simpson and Ronald Goldman. Simpson's arrest comes after he led police in Los Angeles on a highly-televised chase in his white Ford Bronco. It is estimated that 95 million people tuned in to watch the chase unfold live. On TV, people are watching popular shows such as "Clarissa Explains It All", "Dinosaurs", "The Ren & Stimpy Show" and "Star Trek: Deep Space Nine".

Meanwhile, gamers are playing titles such as "Shinobi III: Return of the Ninja Master", "Gunstar Heroes", "Myst" and "Super Metroid". Kids and teenagers are watching TV shows such as "Garfield and Friends", "Blossom", "The Fresh Prince of Bel-Air" and "The Animals of Farthing Wood". If you're a kid or a teenager, then you're probably playing with toys such as "Transformers", "Sylvanian Families", "Game Boy" and "Pogs".

Who was the Prime Minister of the United Kingdom on June 17th, 1994?

Looking for some nostalgia? Here are some Youtube videos relating to June 17th, 1994. Please note that videos are automatically selected by Youtube and that results may vary! Click on the "Load Next Video" button to view the next video in the search playlist. In many cases, you'll find episodes of old TV shows, documentaries, music videos and soap dramas.