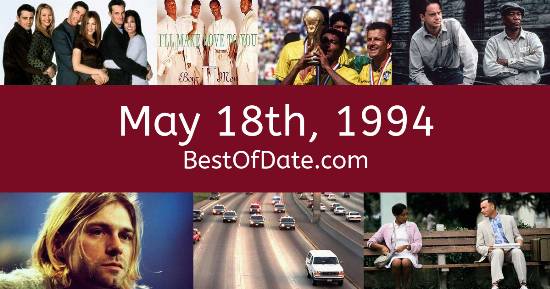 Songs that were on top of the music singles charts in the USA and the United Kingdom on May 18th, 1994.

The date is May 18th, 1994 and it's a Wednesday. Anyone born today will have the star sign Taurus. The summer of 1994 has finally arrived. The weather has warmed up and the evenings are brighter than usual.

In America, the song The Sign by Ace of Base is on top of the singles charts. Over in the UK, Inside by Stiltskin is the number one hit song. Bill Clinton is currently the President of the United States and the movie The Crow is at the top of the Box Office.

In Europe, a war is continuing to rage on in Bosnia and Herzegovina. On the continent of Africa, a horrible event is unfolding, as the Hutu majority in Rwanda attempt to wipe out the Tutsi minority. This genocide began following the assassination of President Juvenal Habyarimana. In South Africa, anti-apartheid revolutionary Nelson Mandela has been inaugurated as South Africa's first black president.

In the United Kingdom, people are currently shocked by the recent death of Labour Party leader John Smith. Smith suddenly died of a heart attack at the age of 55. A new romantic comedy film called "Four Weddings and a Funeral" has just been released in movie theaters. In soccer, A.C. Milan have won the UEFA Champions League after beating Barcelona 4-0 in the final. Meanwhile, Manchester United have won the FA Cup Final after defeating Chelsea 4-0.

If you were to travel back to this day, notable figures such as Nicole Brown Simpson, Andrés Escobar, Raul Julia and Eazy E would all be still alive. On TV, people are watching popular shows such as "Murder, She Wrote", "Dinosaurs", "Martin" and "Beavis and Butt-Head". Meanwhile, gamers are playing titles such as "Mortal Kombat", "Bubsy in Claws Encounters of the Furred Kind", "Mighty Final Fight" and "Mega Man 6".

Children and teenagers are currently watching television shows such as "Are You Afraid of the Dark?", "Dinosaurs", "Mighty Morphin Power Rangers" and "Bill Nye the Science Guy". If you're a kid or a teenager, then you're probably playing with toys such as Cabbage Patch Kids, the SEGA Game Gear, Littlest Pet Shop and Power Rangers figures.

Notable events that occurred around May 18th, 1994.

If you are looking for some childhood nostalgia, then check out May 18th, 2000 instead.

Historical weather information for May 18th, 1994.

Bill Clinton was the President of the United States on May 18th, 1994.

John Major was the Prime Minister of the United Kingdom on May 18th, 1994.