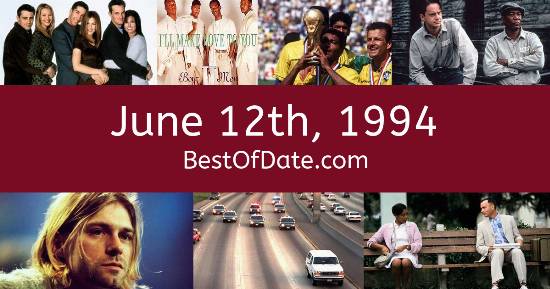 Songs that were on top of the music singles charts in the USA and the United Kingdom on June 12th, 1994.

The date is June 12th, 1994 and it's a Sunday. Anyone born today will have the star sign Gemini. Currently, people are enjoying their weekend.

Bill Clinton is currently the President of the United States and the movie Speed is at the top of the Box Office. In the United Kingdom, John Major is the current Prime Minister. Meanwhile, in technology news, a relatively new storage format called the CD is beginning to outpace the regular cassette tape in music sales. The disc-based format gives listeners the ability to skip between songs instead of having to manually rewind and forward.

On the continent of Africa, a horrible event is unfolding, as the Hutu majority in Rwanda attempt to wipe out the Tutsi minority. This genocide began following the assassination of President Juvenal Habyarimana. TLC singer Lisa "Left Eye" Lopes is currently in the news after she recently burned down NFL star Andre Rison's home following an argument. On TV, people are watching popular shows such as "Last of the Summer Wine", "Melrose Place", "Frasier" and "Boy Meets World".

Meanwhile, gamers are playing titles such as "Mortal Kombat II", "Myst", "Disney's Aladdin" and "Doom". Kids and teenagers are watching TV shows such as "Thomas the Tank Engine", "The Fresh Prince of Bel-Air", "Are You Afraid of the Dark?" and "The Nanny". Popular toys at the moment include the likes of Transformers, G.I. Joe (figures), Nerf Blaster and Teen Talk Barbie.

If you are looking for some childhood nostalgia, then check out June 12th, 2000 instead.

American model.
Born on June 12th, 1996
She was born exactly 2 years after this date.

Bill Clinton was the President of the United States on June 12th, 1994.

John Major was the Prime Minister of the United Kingdom on June 12th, 1994.