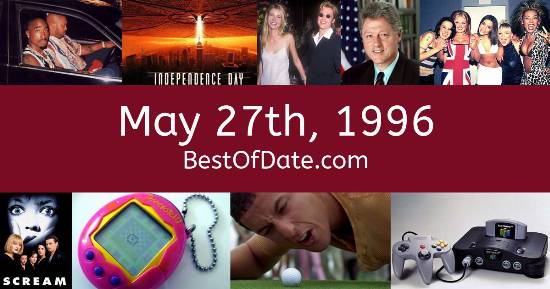 Songs that were on top of the music singles charts in the USA and the United Kingdom on May 27th, 1996.

The date is May 27th, 1996 and it's a Monday. Anyone born today will have the star sign Gemini. The summer of 1996 has finally arrived. The weather has warmed up and the evenings are brighter than usual.

In America, the song Tha Crossroads by Bone Thugs-N-Harmony is on top of the singles charts. Over in the UK, Three Lions by Baddiel & Skinner & Lightning Seeds is the number one hit song. Bill Clinton is currently the President of the United States and the movie Twister is at the top of the Box Office.

Everyone and their grandmother is buying a new "virtual pet" called the Tamagotchi. The last episode of "Murder, She Wrote" has just been aired on television. If you were to travel back to this day, notable figures such as Agnieszka Kotlarska, Tupac Shakur, Yaki Kadafi and Tiny Tim would all be still alive.

On TV, people are watching popular shows such as "Seinfeld", "Melrose Place", "The X-Files" and "Babylon 5". Meanwhile, gamers are playing titles such as "Myst", "The Adventures of Batman & Robin", "Killer Instinct" and "Destruction Derby". Children and teenagers are currently watching television shows such as "Art Attack", "Weird Science", "Sister, Sister" and "In the House".

If you're a kid or a teenager, then you're probably playing with toys such as Sylvanian Families, Fisher-Price Great Adventures Castle, Styrofoam plane gliders and the Tamagotchi.

Notable events that occurred around May 27th, 1996.

If you are looking for some childhood nostalgia, then check out May 27th, 2002 instead.

Historical weather information for May 27th, 1996.

Bill Clinton was the President of the United States on May 27th, 1996.

John Major was the Prime Minister of the United Kingdom on May 27th, 1996.