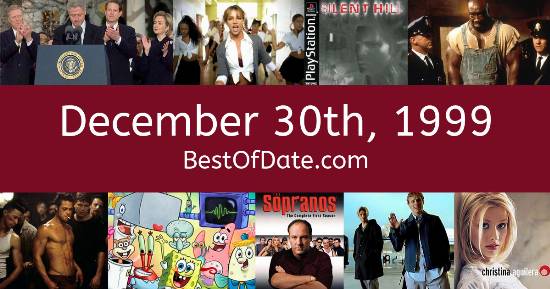 Songs that were on top of the music singles charts in the USA and the United Kingdom on December 30th, 1999.

The date is December 30th, 1999 and it's a Thursday. Anyone born today will have the star sign Capricorn. Christmas Day of 1999 has just passed and many people are relaxing at home and enjoying the holiday season.

In America, the song Smooth by Santana & Rob Thomas is on top of the singles charts. Over in the UK, I Have A Dream / Seasons In The Sun by Westlife is the number one hit song. Bill Clinton is currently the President of the United States and the movie Any Given Sunday is at the top of the Box Office.

As the millennium draws to a close, people are worried about the implications of the Y2K bug. On TV, people are watching popular shows such as "Last of the Summer Wine", "Party of Five", "The King of Queens" and "Will & Grace". Meanwhile, gamers are playing titles such as "Silent Hill", "Final Fantasy VIII", "Tony Hawk's Pro Skater" and "Donkey Kong 64".

Children and teenagers are currently watching television shows such as "All That", "CatDog", "The Wild Thornberrys" and "Roswell". Popular toys at the moment include the likes of Jenga, Yo-yo, Bop It and Spice Girls dolls.

If you are looking for some childhood nostalgia, then check out December 30th, 2005 instead.

Bill Clinton was the President of the United States on December 30th, 1999.

Tony Blair was the Prime Minister of the United Kingdom on December 30th, 1999.

Enter your date of birth below to find out how old you were on December 30th, 1999.

Here are some fun statistics about December 30th, 1999.