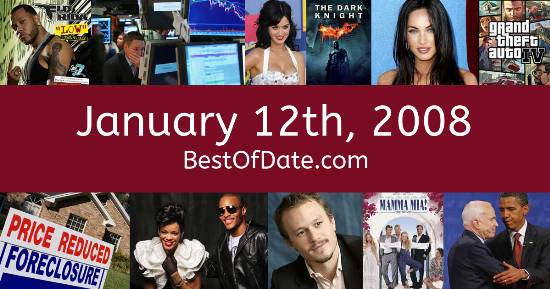 Songs that were on top of the music singles charts in the USA and the United Kingdom on January 12th, 2008.

The date is January 12th, 2008 and it's a Saturday. Anyone born today will have the star sign Capricorn. Currently, people are enjoying their weekend.

The Christmas holiday season is long over, the decorations have been taken down and a sense of normality has returned. In America, the song Low by Flo-Rida & T-Pain is on top of the singles charts. Over in the UK, When You Believe by Leon Jackson is the number one hit song.

George W. Bush Jnr. is currently the President of the United States and the movie The Bucket List is at the top of the Box Office. In the United Kingdom, Gordon Brown is the current Prime Minister. Practically every teenager and adult has a MySpace or a Bebo account.

A rock music genre called "Emo" is extremely popular at the moment. The genre, which stands for "emotional hardcore", has created a subculture of "Emos" who dye their hair black and wear thick frame glasses. Meanwhile, in technology news, more and more people are beginning to use the Internet on their phones. This transition towards mobile Internet has been aided by the recent roll-out of faster 3G networks and the introduction of larger touchscreen phones. A social network called Facebook is beginning to surge in popularity, replacing the likes of MySpace.

Video rental stores such as Blockbuster are currently struggling to keep their heads above water. This is due to the popularity of new online streaming services such as Netflix and Hulu. It's 2008, so the music charts are filled with artists such as Flo Rida, Katy Perry, Rihanna and T.I. On TV, people are watching popular shows such as "King of the Hill", "24", "Stargate Atlantis" and "Grey's Anatomy".

Meanwhile, gamers are playing titles such as "Portal", "Call of Duty 4: Modern Warfare", "Assassin's Creed" and "Uncharted: Drake's Fortune". Kids and teenagers are watching TV shows such as "The Fairly OddParents", "One Tree Hill", "LazyTown" and "Everybody Hates Chris". If you're a kid or a teenager, then you're probably playing with toys such as the Xbox 360, the PlayStation 3 and iPod Touch.

If you are looking for some childhood nostalgia, then check out January 12th, 2014 instead.

George W. Bush Jnr. was the President of the United States on January 12th, 2008.

Gordon Brown was the Prime Minister of the United Kingdom on January 12th, 2008.

Enter your date of birth below to find out how old you were on January 12th, 2008.

Here are some fun statistics about January 12th, 2008.