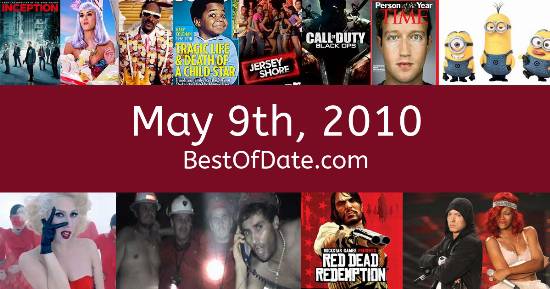 Songs that were on top of the music singles charts in the USA and the United Kingdom on May 9th, 2010:

The date is May 9th, 2010 and it's a Sunday. Anyone born today will have the star sign Taurus. Currently, people are enjoying their weekend.

The summer of 2010 has finally arrived. The weather has warmed up and the evenings are brighter than usual. In America, the song Nothin' On You by B.o.B. ft Bruno Mars is on top of the singles charts. Over in the UK, Good Times by Roll Deep is the number one hit song.

Barack Obama is currently the President of the United States and the movie Nightmare on Elm Street is at the top of the Box Office. In the United Kingdom, Gordon Brown is the current Prime Minister. The term "hipster" is currently growing in use. The word is being used to describe people who are pretentious and deliberately anti-mainstream.

It's 2010, so the music charts are being dominated by artists such as Kesha, Katy Perry, Rihanna, Eminem and Bruno Mars. Bones actor David Boreanaz has publicly admitted that he was unfaithful to his wife, Jaime Bergman. A 36-minute-long stock market crash has recently been caused by automated trading programs.

The Conservative Party, led by David Cameron, have just become the largest party in the the House of Commons following the 2010 United Kingdom general election. Gordon Brown's Labour Party have lost 97 seats. As a result, it looks increasingly likely that the Conservative Party will to return to power for the first time in 13 years. Italian manager Carlo Ancelotti has just led Chelsea to their third Premier League title following an 8-0 win over Wigan Athtelic. People are watching popular TV shows such as "Dora the Explorer", "CSI: NY", "How I Met Your Mother" and "Community".

Meanwhile, gamers are playing titles such as "Minecraft", "Call of Duty: Modern Warfare 2", "Assassin's Creed II" and "Mass Effect 2". Children and teenagers are currently watching television shows such as "Peppa Pig", "The Suite Life on Deck", "Sonny with a Chance" and "Big Time Rush". Popular toys include the likes of "Xbox 360", "PlayStation 3", "ZhuZhu Pets" and "iPad".

Notable events that occurred around May 9th, 2010:

Celebrities and historical figures that were born on the 9th of May:

Who was the Prime Minister of the United Kingdom on May 9th, 2010?

Enter your date of birth below to find out how old you were on May 9th, 2010.

Looking for some nostalgia? Here are some Youtube videos relating to May 9th, 2010. Please note that videos are automatically selected by Youtube and that results may vary! Click on the "Load Next Video" button to view the next video in the search playlist. In many cases, you'll find episodes of old TV shows, documentaries, music videos and soap dramas.