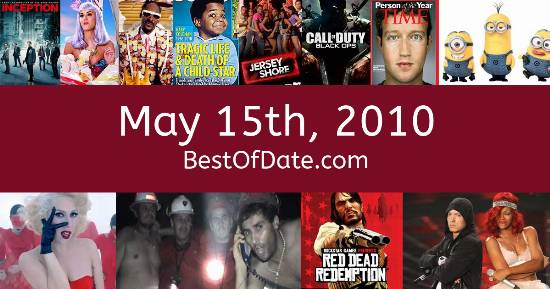 These songs were on top of the music charts in the United States and the United Kingdom on May 15th, 2010.

The movie "Iron Man 2" was at the top of the Box Office on this day.

The date is May 15th, 2010, and it's a Saturday. Anyone born today will have the star sign Taurus. Currently, people are enjoying their weekend.

The summer of 2010 has finally arrived. The weather has warmed up and the evenings are brighter than usual. In America, the song Nothin' On You by B.o.B. ft Bruno Mars is on top of the singles charts. Over in the UK, Good Times by Roll Deep is the number one hit song.

Barack Obama is currently the President of the United States, and the movie Iron Man 2 is at the top of the Box Office. In the United Kingdom, David Cameron is the current Prime Minister. The term "hipster" is currently growing in use. The word is being used to describe people who are pretentious and deliberately anti-mainstream.

Video rental stores such as Blockbuster are continuing to close their doors at the moment. This is due to the increasing popularity of online streaming services such as Netflix and Hulu. It's 2010, so the music charts are being dominated by artists such as Kesha, Katy Perry, Rihanna, Eminem and Bruno Mars. Following the results of the 2010 United Kingdom general election, the Conservative Party and the Liberal Democrats have announced that they will be going into a coalition together. In light of his party's defeat, Gordon Brown has stepped down as the leader of the Labour Party.

In soccer, Chelsea have just won the FA Cup and completed "the double" after beating Portsmouth 1-0. If you were to travel back to this day, notable figures such as Paul Gray, Gary Coleman, Lance Cade and Denise Borino-Quinn would all be still alive. On TV, people are watching popular shows such as "Prison Break", "Dexter", "Sons of Anarchy" and "Community".

Meanwhile, gamers are playing titles such as "Batman: Arkham Asylum", "Borderlands", "God of War III" and "Alan Wake". Kids and teenagers are watching TV shows such as "The Hills", "WordGirl", "The Suite Life on Deck" and "Team Umizoomi". Popular toys at the moment include the likes of the Xbox 360, the PlayStation 3, Iggle Piggle and the iPad.

These are trending news stories and fads that were prevalent at this time. These are topics that would have been in the media on May 15th, 2010.

News stories and other events that happened around May 15th, 2010.

Check out our personality summary for people who were born on May 15th, 2010.

Television shows that people were watching in May, 2010.

Popular video games that people were playing in May of 2010.

If you are looking for some childhood nostalgia, then you should check out May 15th, 2016 instead.

Celebrities, historical figures and other notable people who were born on May 15th.

Historical weather information for May 15th, 2010.

Barack Obama was the President of the United States on May 15th, 2010.

David Cameron was the Prime Minister of the United Kingdom on May 15th, 2010.

Find out what your age was on May 15th, 2010, by entering your DOB below.
This information is not saved on our server.