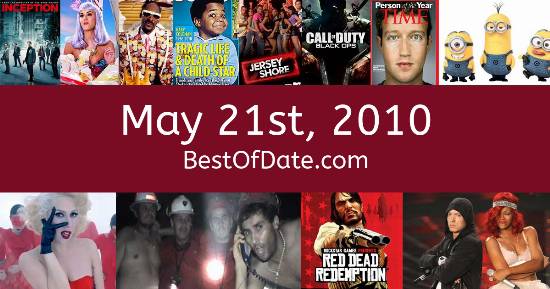 Songs that were on top of the music singles charts in the USA and the United Kingdom on May 21st, 2010:

The date is May 21st, 2010 and it's a Friday. Anyone born today will have the star sign Gemini. Currently, people have "that Friday feeling" and are looking forward to the weekend.

The summer of 2010 has finally arrived. The weather has warmed up and the evenings are brighter than usual. In America, the song OMG by Usher ft will.i.am is on top of the singles charts. Over in the UK, Good Times by Roll Deep is the number one hit song.

Barack Obama is currently the President of the United States and the movie Iron Man 2 is at the top of the Box Office. In the United Kingdom, David Cameron is the current Prime Minister. The term "hipster" is currently growing in use. The word is being used to describe people who are pretentious and deliberately anti-mainstream.

It's 2010, so the music charts are being dominated by artists such as Kesha, Katy Perry, Rihanna, Eminem and Bruno Mars. In soccer, Chelsea have just won the FA Cup and completed "the double" after beating Portsmouth 1-0. The video game "Red Dead Redemption" has just been released by Rockstar.

Notable events that occurred around May 21st, 2010:

Celebrities and historical figures that were born on the 21st of May:

Who was the Prime Minister of the United Kingdom on May 21st, 2010?

Looking for some nostalgia? Here are some Youtube videos relating to May 21st, 2010. Please note that videos are automatically selected by Youtube and that results may vary! Click on the "Load Next Video" button to view the next video in the search playlist. In many cases, you'll find episodes of old TV shows, documentaries, music videos and soap dramas.