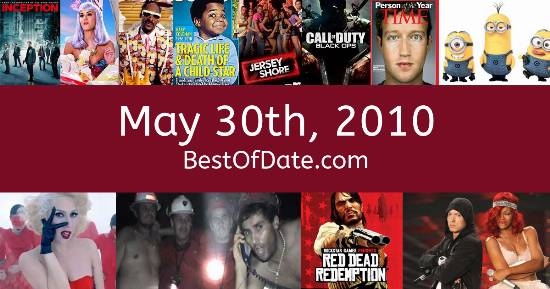 Songs that were on top of the music singles charts in the USA and the United Kingdom on May 30th, 2010.

The date is May 30th, 2010 and it's a Sunday. Anyone born today will have the star sign Gemini. Currently, people are enjoying their weekend.

The summer of 2010 has finally arrived. The weather has warmed up and the evenings are brighter than usual. In America, the song Not Afraid by Eminem is on top of the singles charts. Over in the UK, Nothin' On You by B.o.B. ft Bruno Mars is the number one hit song.

Barack Obama is currently the President of the United States and the movie Iron Man 2 is at the top of the Box Office. In the United Kingdom, David Cameron is the current Prime Minister. The term "hipster" is currently growing in use. The word is being used to describe people who are pretentious and deliberately anti-mainstream.

Video rental stores such as Blockbuster are continuing to close their doors at the moment. This is due to the increasing popularity of online streaming services such as Netflix and Hulu. It's 2010, so the music charts are being dominated by artists such as Kesha, Katy Perry, Rihanna, Eminem and Bruno Mars. The video game "Red Dead Redemption" has just been released by Rockstar.

The last episode of the series "Lost" has just been aired on television. There are currently polarized reactions to the show's finale. Rock fans are mourning the death of Slipknot bassist Paul Gray, who recently passed away at the age of 38 due to an accidental overdose. The TV shows "Law & Order" and "24" have both recently come to an end.

Lee DeWyze has won the 9th season of American Idol. In soccer, Jose Mourinho's side Inter Milan have just won the 2010 UEFA Champions League after beating Bayern Munich 2-0 in the final. Following the win, it has been announced that Mourinho will be taking over as the new manager of Spanish side Real Madrid. Tributes are pouring in for actor Gary Coleman, who has passed away at the age of 42.

In showbiz news, singer Shania Twain has divorced her husband Robert John Lange after 14 years of marriage. Germany have won the Eurovision Song Contest with the song "Satellite" by Lena. If you were to travel back to this day, notable figures such as Lance Cade, Denise Borino-Quinn, Pete Postlethwaite and Nate Dogg would all be still alive.

On TV, people are watching popular shows such as "CSI: Miami", "The Office", "Prison Break" and "RuPaul's Drag Race". Meanwhile, gamers are playing titles such as "Mafia Wars", "Borderlands", "Heavy Rain" and "God of War III". Children and teenagers are currently watching television shows such as "LazyTown", "Curious George", "The Suite Life on Deck" and "Sonny with a Chance".

If you're a kid or a teenager, then you're probably playing with toys such as the PlayStation 3, Iggle Piggle, the KidiZoom Camera and the iPad.

Notable events that occurred around May 30th, 2010.

If you are looking for some childhood nostalgia, then check out May 30th, 2016 instead.

Historical weather information for May 30th, 2010.

Barack Obama was the President of the United States on May 30th, 2010.

David Cameron was the Prime Minister of the United Kingdom on May 30th, 2010.