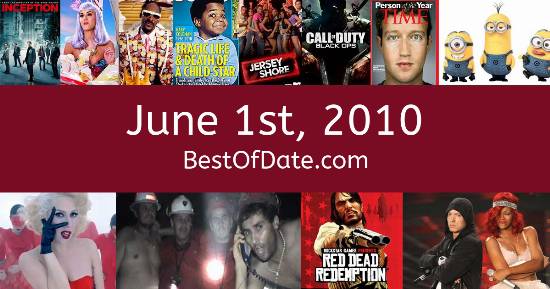 Songs that were on top of the music singles charts in the USA and the United Kingdom on June 1st, 2010:

The date is June 1st, 2010 and it's a Tuesday. Anyone born today will have the star sign Gemini. It's summer, so the temperatures are warmer and the evenings are longer than usual.

In America, the song OMG by Usher ft will.i.am is on top of the singles charts. Over in the UK, Dirtee Disco by Dizzee Rascal is the number one hit song. Barack Obama is currently the President of the United States and the movie Iron Man 2 is at the top of the Box Office.

Lee DeWyze has won the 9th season of American Idol. In soccer, Jose Mourinho's side Inter Milan have just won the 2010 UEFA Champions League after beating Bayern Munich 2-0 in the final. Following the win, it has been announced that Mourinho will be taking over as the new manager of Spanish side Real Madrid. Tributes are pouring in for actor Gary Coleman, who has passed away at the age of 42.

In showbiz news, singer Shania Twain has divorced her husband Robert John Lange after 14 years of marriage. Germany have won the Eurovision Song Contest with the song "Satellite" by Lena. A recent military operation by Israel against six civilian ships calling themselves the "Gaza Freedom Flotilla" has left nine activists dead. The incident has sparked widespread international condemnation.

Female rap star Nicki Minaj has just released her debut single "Your Love". On TV, people are watching popular shows such as "Two and a Half Men", "CSI: NY", "Bones" and "White Collar". Meanwhile, gamers are playing titles such as "Mafia Wars", "Assassin's Creed II", "Battlefield: Bad Company 2" and "God of War III".

Children and teenagers are currently watching television shows such as "Dora the Explorer", "Peppa Pig", "Glee" and "Team Umizoomi". If you're a kid or a teenager, then you're probably playing with toys such as "Xbox 360", "PlayStation 3", "ZhuZhu Pets" and "iPad".

Celebrities, historical figures and noteable people who were born on the 1st of June:

Who was the Prime Minister of the United Kingdom on June 1st, 2010?

Enter your date of birth below to find out how old you were on June 1st, 2010.

Looking for some nostalgia? Here are some Youtube videos relating to June 1st, 2010. Please note that videos are automatically selected by Youtube and that results may vary! Click on the "Load Next Video" button to view the next video in the search playlist. In many cases, you'll find episodes of old TV shows, documentaries, music videos and soap dramas.

Here are some fun statistics about June 1st, 2010.