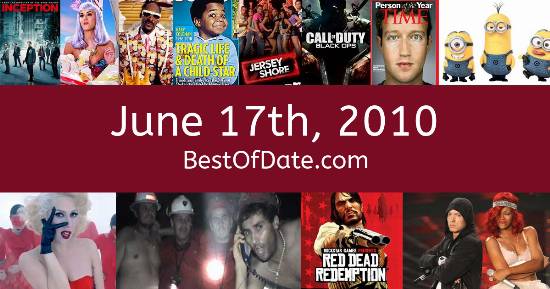 Songs that were on top of the music singles charts in the USA and the United Kingdom on June 17th, 2010:

The date is June 17th, 2010 and it's a Thursday. Anyone born today will have the star sign Gemini. It's summer, so the temperatures are warmer and the evenings are longer than usual.

In South Africa, the 2010 FIFA World Cup is currently taking place and stadiums are being filled with the sound of vuvuzelas. Celebrity gossip blogger Perez Hilton has come under fire after posting an upskirt picture of 17-year-old Miley Cyrus on Twitter. In celebrity news, actor Harrison Ford has married actress Calista Flockhart in Santa Fe, New Mexico.

AOL have sold their struggling social network "Bebo" to Criterion Capital Partners. Like many social networks, the site has found it difficult to compete with the rising popularity of Facebook. AOL's decision to buy Bebo in 2008 for $850 million has been described as one of the worst deals ever made in the dotcom era. In basketball, the Los Angeles Lakers have just won the 2010 NBA Finals by beating the Boston Celtics in the seventh game. On TV, people are watching popular shows such as "Two and a Half Men", "Extreme Makeover: Home Edition", "Prison Break" and "RuPaul's Drag Race".

Meanwhile, gamers are playing titles such as "Halo 3: ODST", "Borderlands", "Assassin's Creed II" and "Mass Effect 2". Kids and teenagers are watching TV shows such as "The Fairly OddParents", "One Tree Hill", "Sonny with a Chance" and "Good Luck Charlie". If you're a kid or a teenager, then you're probably playing with toys such as "Xbox 360", "PlayStation 3", "ZhuZhu Pets" and "iPad".

Who was the Prime Minister of the United Kingdom on June 17th, 2010?

Looking for some nostalgia? Here are some Youtube videos relating to June 17th, 2010. Please note that videos are automatically selected by Youtube and that results may vary! Click on the "Load Next Video" button to view the next video in the search playlist. In many cases, you'll find episodes of old TV shows, documentaries, music videos and soap dramas.