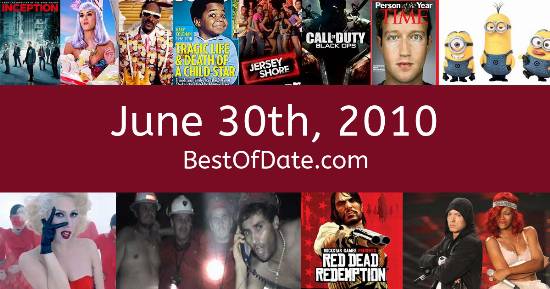 Songs that were on top of the music singles charts in the USA and the United Kingdom on June 30th, 2010.

The date is June 30th, 2010 and it's a Wednesday. Anyone born today will have the star sign Cancer. It's summer, so the temperatures are warmer and the evenings are longer than usual.

The song California Gurls by Katy Perry is on top of the singles charts in both the USA and the United Kingdom. Barack Obama is currently the President of the United States and the movie Toy Story 3 is at the top of the Box Office. In the United Kingdom, David Cameron is the current Prime Minister.

In South Africa, the 2010 FIFA World Cup is currently taking place and stadiums are being filled with the sound of vuvuzelas. In celebrity news, actress Megan Fox has married 90210 star Brian Austin Green in Hawaii. Julia Gillard has just become the first female Prime Minister of Australia following the resignation of Kevin Rudd.

If you are looking for some childhood nostalgia, then check out June 30th, 2016 instead.

Barack Obama was the President of the United States on June 30th, 2010.

David Cameron was the Prime Minister of the United Kingdom on June 30th, 2010.