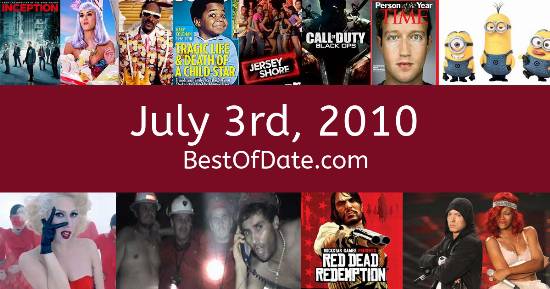 Songs that were on top of the music singles charts in the USA and the United Kingdom on July 3rd, 2010.

The movie "The Twilight Saga: Eclipse" was at the top of the box office on July 3rd, 2010.

The date is July 3rd, 2010 and it's a Saturday. Anyone born today will have the star sign Cancer. Currently, people are enjoying their weekend.

In America, the July 4th celebrations are fast approaching. It's summer, so the temperatures are warmer and the evenings are longer than usual. The song California Gurls by Katy Perry is on top of the singles charts in both the USA and the United Kingdom.

Barack Obama is currently the President of the United States and the movie The Twilight Saga: Eclipse is at the top of the Box Office. In the United Kingdom, David Cameron is the current Prime Minister. The term "hipster" is currently growing in use. The word is being used to describe people who are pretentious and deliberately anti-mainstream.

It's 2010, so the music charts are being dominated by artists such as Kesha, Katy Perry, Rihanna, Eminem and Bruno Mars. In South Africa, the 2010 FIFA World Cup is currently taking place and stadiums are being filled with the sound of vuvuzelas. Socialite Paris Hilton is in the news after being escorted out of a World Cup game in South Africa for smoking marijuana.

A Youtube video of Paul "Bear" Vasquez' ecstatic reaction to a Double Rainbow has become an Internet sensation. On TV, people are watching popular shows such as "One Tree Hill", "CSI: NY", "Sons of Anarchy" and "Community". Meanwhile, gamers are playing titles such as "Halo 3: ODST", "Call of Duty: Modern Warfare 2", "Mass Effect 2" and "Red Dead Redemption".

Kids and teenagers are watching TV shows such as "One Tree Hill", "Peppa Pig", "Go, Diego, Go!" and "Mickey Mouse Clubhouse". Popular toys at the moment include the likes of the Xbox 360, the PlayStation 3, ZhuZhu Pets and the iPad.

Barack Obama was the President of the United States on July 3rd, 2010.

David Cameron was the Prime Minister of the United Kingdom on July 3rd, 2010.

Enter your date of birth below to find out how old you were on July 3rd, 2010.

Here are some fun statistics about July 3rd, 2010.

Leave a comment and tell everyone why July 3rd, 2010 is important to you.