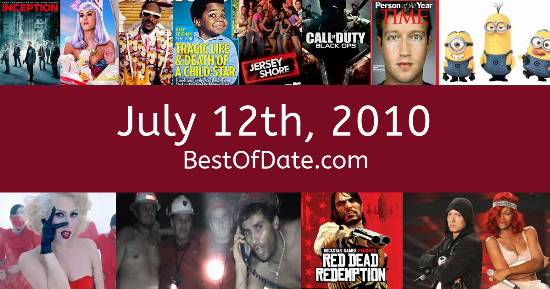 Songs that were on top of the music singles charts in the USA and the United Kingdom on July 12th, 2010.

The date is July 12th, 2010 and it's a Monday. Anyone born today will have the star sign Cancer. It's summer, so the temperatures are warmer and the evenings are longer than usual.

In America, the song California Gurls by Katy Perry is on top of the singles charts. Over in the UK, The Club Is Alive by JLS is the number one hit song. Barack Obama is currently the President of the United States and the movie Despicable Me is at the top of the Box Office.

In basketball, LeBron James' recent announcement that he will be leaving the Cleveland Cavaliers for Miami Heat has sparked controversy. An audio recording of actor Mel Gibson going on a racist rant have been leaked on the Internet. As a result, Gibson has been dropped by his agency William Morris Endeavor. American Idol winner Carrie Underwood and ice hockey player Mike Fisher have just been married in Greensboro, Georgia.

In soccer, Spain have won the 2010 FIFA World Cup after beating The Netherlands 1-0 in the final. On TV, people are watching popular shows such as "Extreme Makeover: Home Edition", "The Office", "Breaking Bad" and "Community". Meanwhile, gamers are playing titles such as "Farmville", "Borderlands", "Heavy Rain" and "Red Dead Redemption".

Kids and teenagers are watching TV shows such as "Hannah Montana", "iCarly", "The Suite Life on Deck" and "Sonny with a Chance". If you're a kid or a teenager, then you're probably playing with toys such as the Xbox 360, the PlayStation 3, ZhuZhu Pets and the iPad.

Celebrities, historical figures and notable people who were born on the 12th of July.

Barack Obama was the President of the United States on July 12th, 2010.

David Cameron was the Prime Minister of the United Kingdom on July 12th, 2010.

Leave a comment and tell everyone why July 12th, 2010 is important to you.