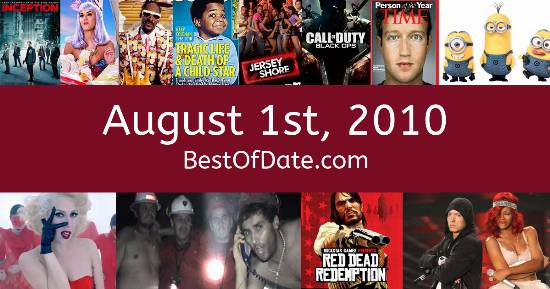 August 1st, 2010 relates to an event in a movie, book, game or television series:

Songs that were on top of the music singles charts in the USA and the United Kingdom on August 1st, 2010:

The date is August 1st, 2010 and it's a Sunday. Anyone born today will have the star sign Leo. Currently, people are enjoying their weekend.

It's summer, so the temperatures are warmer and the evenings are longer than usual. In America, the song California Gurls by Katy Perry is on top of the singles charts. Over in the UK, We No Speak Americano by Yolanda Be Cool is the number one hit song.

Barack Obama is currently the President of the United States and the movie Inception is at the top of the Box Office. In the United Kingdom, David Cameron is the current Prime Minister. The term "hipster" is currently growing in use. The word is being used to describe people who are pretentious and deliberately anti-mainstream.

It's 2010, so the music charts are being dominated by artists such as Kesha, Katy Perry, Rihanna, Eminem and Bruno Mars. Missing NBA player Lorenzen Wright has been found shot to death near a wooded area outside of Memphis, Tennessee. A local news interview of Antoine Dodson telling people to "hide yo kids, hide yo wife, and hide yo husband" because "they rapin' err'body out here" has become an Internet sensation. The video has inspired several musical remixes, such as the "Bed Intruder Song" by The Gregory Brothers.

Over 1,600 people have been killed by recent floods in Pakistan. Jersey Shore star "Snooki" has been arrested in New Jersey for disturbing the peace. On TV, people are watching popular shows such as "Dora the Explorer", "CSI: Miami", "How I Met Your Mother" and "Jersey Shore".

Meanwhile, gamers are playing titles such as "Halo 3: ODST", "Left 4 Dead 2", "Mass Effect 2" and "Red Dead Redemption". Kids and teenagers are watching TV shows such as "Mickey Mouse Clubhouse", "Phineas and Ferb", "The Suite Life on Deck" and "Team Umizoomi". Popular toys include the likes of "Xbox 360", "PlayStation 3", "ZhuZhu Pets" and "iPad".

Who was the Prime Minister of the United Kingdom on August 1st, 2010?

Enter your date of birth below to find out how old you were on August 1st, 2010.

Looking for some nostalgia? Here are some Youtube videos relating to August 1st, 2010. Please note that videos are automatically selected by Youtube and that results may vary! Click on the "Load Next Video" button to view the next video in the search playlist. In many cases, you'll find episodes of old TV shows, documentaries, music videos and soap dramas.

Here are some fun statistics about August 1st, 2010.