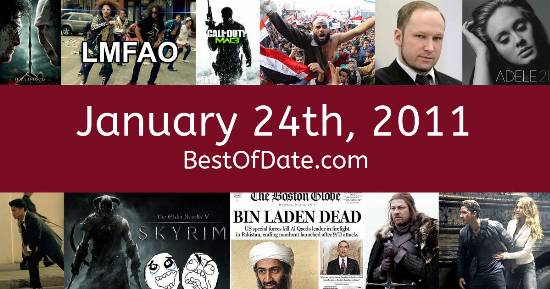 On January 24th, 2011, the following songs were at the top of the music charts in the USA and the UK.

The top "Box Office" movie on this date was the film "No Strings Attached".

The date is January 24th, 2011, and it's a Monday. Anyone born today will have the star sign Aquarius. The song Grenade by Bruno Mars is on top of the singles charts in both the USA and the United Kingdom.

Barack Obama is currently the President of the United States, and the movie No Strings Attached is at the top of the Box Office. In the United Kingdom, David Cameron is the current Prime Minister. The term "hipster" is currently growing in use. The word is being used to describe people who are pretentious and deliberately anti-mainstream.

A wave of demonstrations and protests have been taking place across the Middle East, in what has become known as the "Arab Spring". It's 2011, so the music charts are being dominated by artists such as Adele, Maroon 5, LMFAO, Katy Perry, Rihanna and Bruno Mars. A meme called "Inglip" is currently popular on websites such as Reddit, as users post commands that they received via the words shown in CAPTCHA images.

In Irish politics, Taoiseach Brian Cowen has resigned as the leader of Fianna Fail. Meanwhile, the Green Party have pulled out of government. An election is now imminent. 37 people have lost their lives following a suicide attack at the Domodedovo International Airport in Russia. Adele has just released her single "Someone like You".

If you were to travel back to this day, notable figures such as Nate Dogg, Elizabeth Taylor, Randy Savage and Margo Dydek would all be still alive. On TV, people are watching popular shows such as "One Tree Hill", "How I Met Your Mother", "True Blood" and "Boardwalk Empire". Meanwhile, gamers are playing titles such as "God of War III", "Alan Wake", "Fallout: New Vegas" and "Call of Duty: Black Ops".

Kids and teenagers are watching TV shows such as "Dora the Explorer", "The Fairly OddParents", "iCarly" and "Team Umizoomi". Popular toys at the moment include the likes of the Xbox 360, the PlayStation 3, the KidiZoom Camera and ZhuZhu Pets.

These are trending news stories and fads that were prevalent at this time. These are topics that would have been in the media on January 24th, 2011.

Check out our personality summary for people who were born on January 24th, 2011.

If you are looking for some childhood nostalgia, then you should check out January 24th, 2017, instead.

Barack Obama was the President of the United States on January 24th, 2011.

Enter your date of birth below to find out how old you were on January 24th, 2011.
This information is not transmitted to our server.

Here are some fun statistics about January 24th, 2011.