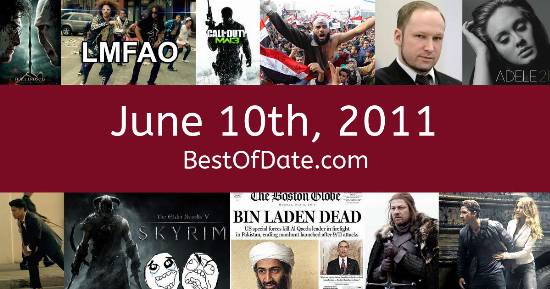 Songs that were on top of the music singles charts in the USA and the United Kingdom on June 10th, 2011.

The date is June 10th, 2011 and it's a Friday. Anyone born today will have the star sign Gemini. Currently, people have "that Friday feeling" and are looking forward to the weekend.

It's summer, so the temperatures are warmer and the evenings are longer than usual. In America, the song Rolling In The Deep by Adele is on top of the singles charts. Over in the UK, Give Me Everything by Pitbull is the number one hit song.

Barack Obama is currently the President of the United States and the movie Super 8 is at the top of the Box Office. In the United Kingdom, David Cameron is the current Prime Minister. The term "hipster" is currently growing in use. The word is being used to describe people who are pretentious and deliberately anti-mainstream.

The ongoing trial of Casey Anthony for the murder her 2-year-old daughter Caylee is receiving widespread attention on social media. A blackhat hacking group called "LulzSec" are currently in the news following a number of high profile attacks on companies such as Sony. An Advice Animal meme called "Good Guy Greg" is beginning to take off in popularity.

Democratic congressman Anthony Weiner has come under fire following revelations that he sent explicit photographs to a woman on Twitter. Weiner, who originally denied sending the images, has now admitted sending them and apologized for lying. However, he is refusing to resign. Rapper Ja Rule has just begun a two year prison sentence for attempted possession of a weapon. In Ireland, former Finance Minister Brian Lenihan has passed away after a battle with pancreatic cancer.

If you were to travel back to this day, notable figures such as Ryan Dunn, Betty Ford, Amy Winehouse and Zyzz would all be still alive. On TV, people are watching popular shows such as "Futurama", "Extreme Makeover: Home Edition", "House" and "The Walking Dead". Meanwhile, gamers are playing titles such as "Halo: Reach", "Fallout: New Vegas", "Call of Duty: Black Ops" and "Duke Nukem Forever".

Children and teenagers are currently watching television shows such as "Peppa Pig", "Phineas and Ferb", "Glee" and "Good Luck Charlie". Popular toys at the moment include the likes of the Xbox 360, the PlayStation 3, the KidiZoom Camera and the iPad.

If you are looking for some childhood nostalgia, then check out June 10th, 2017 instead.

Barack Obama was the President of the United States on June 10th, 2011.

David Cameron was the Prime Minister of the United Kingdom on June 10th, 2011.