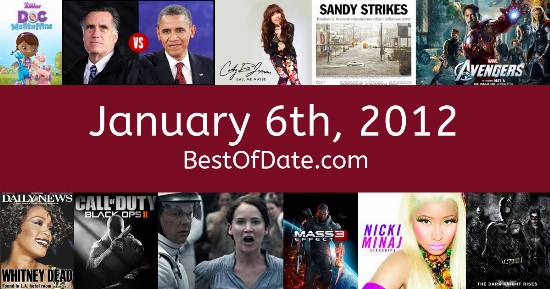 These songs were on top of the music charts in the United States and the United Kingdom on January 6th, 2012.

The date is January 6th, 2012, and it's a Friday. Anyone born today will have the star sign Capricorn. Currently, people have "that Friday feeling" and are looking forward to the weekend.

People are starting to return back to work and school after the Christmas holidays. In America, the song Sexy And I Know It by LMFAO is on top of the singles charts. Over in the UK, Paradise by Coldplay is the number one hit song.

Barack Obama is currently the President of the United States, and the movie The Devil Inside is at the top of the Box Office. In the United Kingdom, David Cameron is the current Prime Minister. Video rental stores such as Blockbuster are continuing to close their doors at the moment. This is due to the increasing popularity of online streaming services such as Netflix and Hulu.

Katy Perry and Russell Brand have recently announced that they will be divorcing after 14 months of marriage. It's 2012, so the music charts are being dominated by artists such as Carly Rae Jepsen, Gotye, Flo Rida, LMFAO and Ellie Goulding. If you were to travel back to this day, notable figures such as Whitney Houston, Edd Gould, MCA and Rodney King would all be still alive.

On TV, people are watching popular shows such as "One Tree Hill", "Bones", "Mad Men" and "The Walking Dead". Meanwhile, gamers are playing titles such as "Dead Space 2", "Crysis 2", "Portal 2" and "Call of Duty: Modern Warfare 3". Kids and teenagers are watching TV shows such as "Johnny Test", "Ben 10", "Horrid Henry" and "Good Luck Charlie".

These are trending news stories and fads that were prevalent at this time. These are topics that would have been in the media on January 6th, 2012.

Check out our personality summary for people who were born on January 6th, 2012.

Television shows that people were watching in January, 2012.

Popular video games that people were playing in January of 2012.

If you are looking for some childhood nostalgia, then you should check out January 6th, 2018 instead.

Actress. Deceased
Born on January 6th, 1964
She was not alive on this date.

Barack Obama was the President of the United States on January 6th, 2012.

David Cameron was the Prime Minister of the United Kingdom on January 6th, 2012.

Enter your date of birth below to find out how old you were on January 6th, 2012.
This information is not transmitted to our server.

Here are some fun statistics about January 6th, 2012.