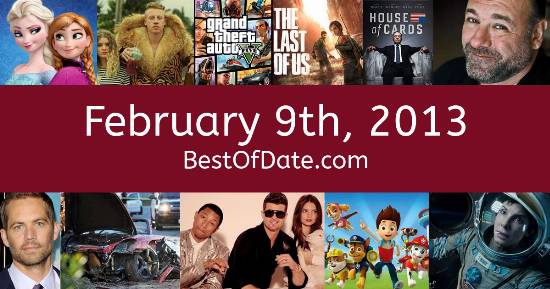 Songs that were on top of the music singles charts in the USA and the United Kingdom on February 9th, 2013.

The movie "Identity Thief" was at the top of the box office on February 9th, 2013.

The date is February 9th, 2013 and it's a Saturday. Anyone born today will have the star sign Aquarius. Currently, people are enjoying their weekend.

Valentine's Day is just around the corner. The song Thrift Shop by Macklemore & Ryan Lewis is on top of the singles charts in both the USA and the United Kingdom. Barack Obama is currently the President of the United States and the movie Identity Thief is at the top of the Box Office.

A new video-hosting service called "Vine" has just been launched. An Internet meme called "The Harlem Shake" is currently going viral. The first season of a new show called "House of Cards" has just been released on Netflix.

The Baltimore Ravens have just won the Super Bowl after defeating the San Francisco 49ers. If you were to travel back to this day, notable figures such as Reeva Steenkamp, Hugo Chavez, James Gandolfini and Cory Monteith would all be still alive. On TV, people are watching popular shows such as "CSI: NY", "Desperate Housewives", "RuPaul's Drag Race" and "Once Upon a Time".

Meanwhile, gamers are playing titles such as "Minecraft", "Mark of the Ninja", "Call of Duty: Black Ops II" and "Far Cry 3". Kids and teenagers are watching TV shows such as "Mickey Mouse Clubhouse", "Curious George", "Phineas and Ferb" and "WordGirl". Popular toys at the moment include the likes of the Xbox 360, the PlayStation 3, Skylanders Giants figures and the Wii U.

If you are looking for some childhood nostalgia, then check out February 9th, 2019 instead.

Barack Obama was the President of the United States on February 9th, 2013.

David Cameron was the Prime Minister of the United Kingdom on February 9th, 2013.

Enter your date of birth below to find out how old you were on February 9th, 2013.

Here are some fun statistics about February 9th, 2013.

Have something to say about February 9th, 2013?