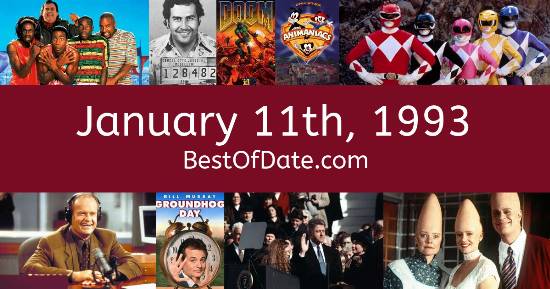 Songs that were on top of the music singles charts in the USA and the United Kingdom on January 11th, 1993.

The date is January 11th, 1993 and it's a Monday. Anyone born today will have the star sign Capricorn. The Christmas holiday season is long over, the decorations have been taken down and a sense of normality has returned.

A new sci-fi series called "Star Trek: Deep Space Nine" has just been aired on television. In Rochester, New York, over $7 million dollars has been stolen from a Brink's Armored Car Depot. In music news, the soundtrack for "The Bodyguard" has broken a new record by selling 1 million copies in one week in the USA.

In wrestling, the WWF has launched a new TV program called "Monday Night Raw". The new show will replace "Prime Time Wrestling", which had been running for eight years. On TV, people are watching popular shows such as "Murder, She Wrote", "In the Heat of the Night", "Beverly Hills, 90210" and "X-Men". Meanwhile, gamers are playing titles such as "Duck Hunt", "Street Fighter II: The World Warrior", "Wolfenstein 3D" and "Final Fantasy V".

Children and teenagers are currently watching television shows such as "Mister Rogers' Neighborhood", "Thomas the Tank Engine", "Barney & Friends" and "Batman: The Animated Series". Popular toys at the moment include the likes of Sylvanian Families, Micro Machines, Teenage Mutant Hero Turtles figures and the Talkboy.

If you are looking for some childhood nostalgia, then check out January 11th, 1999 instead.

George W. Bush Snr. was the President of the United States on January 11th, 1993.

John Major was the Prime Minister of the United Kingdom on January 11th, 1993.

Enter your date of birth below to find out how old you were on January 11th, 1993.

Here are some fun statistics about January 11th, 1993.