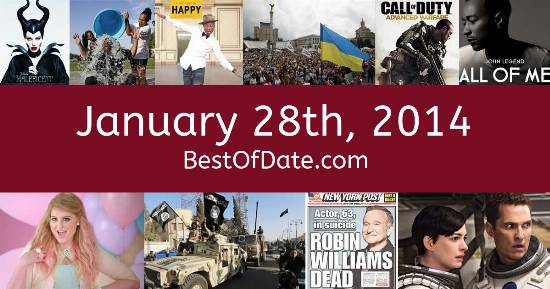 Songs that were on top of the music singles charts in the USA and the United Kingdom on January 28th, 2014.

The date is January 28th, 2014 and it's a Tuesday. Anyone born today will have the star sign Aquarius. In America, the song Timber by Pitbull featuring Kesha is on top of the singles charts.

A mobile game called "Flappy Bird" is currently surging in popularity. It is 2014, so the music charts are being dominated by artists such as Pharrell Williams, Katy Perry, John Legend, Iggy Azalea, Meghan Trainor, Lorde and Jason Derulo. In soccer, Chelsea player Juan Mata has recently transferred to Manchester United.

If you were to travel back to this day, notable figures such as Philip Seymour Hoffman, Viscera, Peaches Geldof and The Ultimate Warrior would all be still alive. On TV, people are watching popular shows such as "Sons of Anarchy", "Community", "Boardwalk Empire" and "Black Mirror". Meanwhile, gamers are playing titles such as "Saints Row IV", "Tom Clancy's Splinter Cell: Blacklist", "Pokémon X and Y" and "Call of Duty: Ghosts".

Children and teenagers are currently watching television shows such as "LazyTown", "Curious George", "Glee" and "Doc McStuffins". Popular toys at the moment include the likes of Rainbow Loom, the Furby Boom, the Xbox One and Frozen dolls.

If you are looking for some childhood nostalgia, then check out January 28th, 2020 instead.

Barack Obama was the President of the United States on January 28th, 2014.

David Cameron was the Prime Minister of the United Kingdom on January 28th, 2014.

Enter your date of birth below to find out how old you were on January 28th, 2014.

Here are some fun statistics about January 28th, 2014.