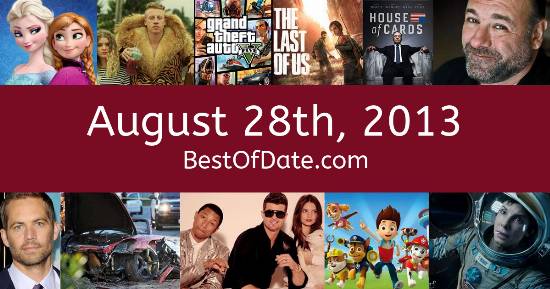 Songs that were on top of the music singles charts in the USA and the United Kingdom on August 28th, 2013.

The date is August 28th, 2013 and it's a Wednesday. Anyone born today will have the star sign Virgo. The summer of 2013 is coming to an end and fall is just around the corner.

In America, the song Blurred Lines by Robin Thicke is on top of the singles charts. Over in the UK, Burn by Ellie Goulding is the number one hit song. Barack Obama is currently the President of the United States and the movie The Butler is at the top of the Box Office.

Hundreds of people have been left dead following a chemical attack on rebel-controlled areas in Ghouta, Syria. The attack is receiving widespread condemnation across the world. In soccer, Brazilian footballer Willian has just signed for Chelsea despite earlier reports that he was expected to join Tottenham. In music, Justin Timberlake's music video "Mirrors" has just been crowned as the winner at the 2013 MTV Video Music Awards. If you were to travel back to this day, notable figures such as Paul Walker, Nelson Mandela, James Avery and Ariel Sharon would all be still alive.

If you're a kid or a teenager, then you're probably playing with toys such as the Xbox 360, the PlayStation 3, the Wii U and Rainbow Loom.

If you are looking for some childhood nostalgia, then check out August 28th, 2019 instead.

Barack Obama was the President of the United States on August 28th, 2013.

David Cameron was the Prime Minister of the United Kingdom on August 28th, 2013.

Enter your date of birth below to find out how old you were on August 28th, 2013.