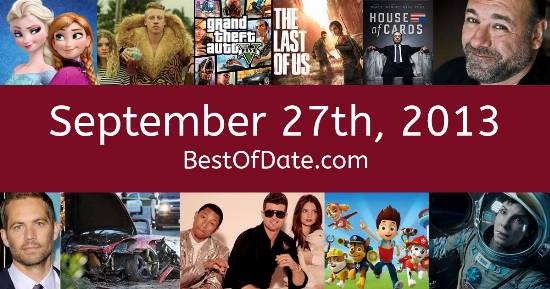 September 27th, 2013 relates to an event in a movie, book, game or television series:

Songs that were on top of the music singles charts in the USA and the United Kingdom on September 27th, 2013:

The date is September 27th, 2013 and it's a Friday. Anyone born today will have the star sign Libra. Currently, people have "that Friday feeling" and are looking forward to the weekend.

Schools have started back and autumn has arrived, so temperatures have started to cool and trees are beginning to shed their leaves. The earthy smells of fall have started to fill the air. In America, the song Wrecking Ball by Miley Cyrus is on top of the singles charts.

Over in the UK, Talk Dirty by Jason Derulo is the number one hit song. Barack Obama is currently the President of the United States and the movie Cloudy with a Chance of Meatballs 2 is at the top of the Box Office. In the United Kingdom, David Cameron is the current Prime Minister.

A new show called "Peaky Blinders" has just debuted on Netflix. The highly-anticipated game "Grand Theft Auto V" has just been released. In Kenya, 67 people have lost their lives following a Islamic terrorist attack on the Westgate shopping mall.

On TV, people are watching popular shows such as "Breaking Bad", "The Vampire Diaries", "Orange Is the New Black" and "Peaky Blinders". Meanwhile, gamers are playing titles such as "Call of Duty: Black Ops II", "Aliens: Colonial Marines", "Metro: Last Light" and "The Last of Us". Children and teenagers are currently watching television shows such as "Dora the Explorer", "Curious George", "Lab Rats: Bionic Island" and "Doc McStuffins".

Celebrities, historical figures and noteable people who were born on the 27th of September:

Who was the Prime Minister of the United Kingdom on September 27th, 2013?

Enter your date of birth below to find out how old you were on September 27th, 2013.

Looking for some nostalgia? Here are some Youtube videos relating to September 27th, 2013. Please note that videos are automatically selected by Youtube and that results may vary! Click on the "Load Next Video" button to view the next video in the search playlist. In many cases, you'll find episodes of old TV shows, documentaries, music videos and soap dramas.

Here are some fun statistics about September 27th, 2013.