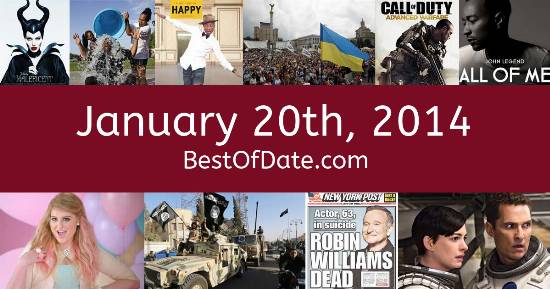 January 20th, 2014 relates to a fictional event in a movie, book, game or television series.

Songs that were on top of the music singles charts in the USA and the United Kingdom on January 20th, 2014.

The date is January 20th, 2014 and it's a Monday. Anyone born today will have the star sign Aquarius. In America, the song Timber by Pitbull featuring Kesha is on top of the singles charts.

A mobile game called "Flappy Bird" is currently surging in popularity. It is 2014, so the music charts are being dominated by artists such as Pharrell Williams, Katy Perry, John Legend, Iggy Azalea, Meghan Trainor, Lorde and Jason Derulo. Serbian midfielder Nemanja Matić has joined English side Chelsea for a fee of £21 million.

On TV, people are watching popular shows such as "Bones", "Sons of Anarchy", "The Vampire Diaries" and "Black Mirror". Meanwhile, gamers are playing titles such as "Dota 2", "ARMA 3", "Battlefield 4" and "DayZ". Children and teenagers are currently watching television shows such as "Dora the Explorer", "Peppa Pig", "Every Witch Way" and "Sheriff Callie's Wild West".

If you are looking for some childhood nostalgia, then check out January 20th, 2020 instead.

Celebrities, historical figures and notable people who were born on the 20th of January.

Barack Obama was the President of the United States on January 20th, 2014.

David Cameron was the Prime Minister of the United Kingdom on January 20th, 2014.

Enter your date of birth below to find out how old you were on January 20th, 2014.

Here are some fun statistics about January 20th, 2014.