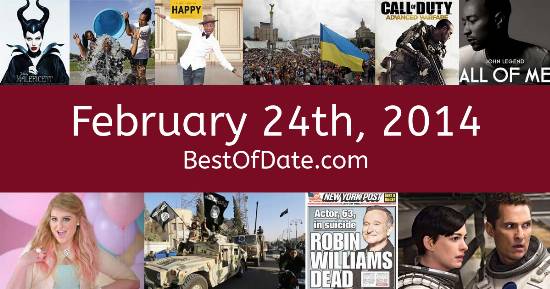 Songs that were on top of the music singles charts in the USA and the United Kingdom on February 24th, 2014.

The date is February 24th, 2014 and it's a Monday. Anyone born today will have the star sign Pisces. In America, the song Dark Horse by Katy Perry featuring Juicy J is on top of the singles charts.

Over in the UK, Rather Be by Clean Bandit featuring Jess Glynne is the number one hit song. Barack Obama is currently the President of the United States and the movie The LEGO Movie is at the top of the Box Office. In the United Kingdom, David Cameron is the current Prime Minister.

It is 2014, so the music charts are being dominated by artists such as Pharrell Williams, Katy Perry, John Legend, Iggy Azalea, Meghan Trainor, Lorde and Jason Derulo. Demonstrations in Ukraine have turned to violence. People are being killed as protesters clash with Ukrainian security forces. Meanwhile, MPs have voted to remove Viktor Yanukovych from the post of president on the grounds that he is unable to fulfill his duties. Actor Harold Ramis, who played the character Egon in Ghostbusters, has passed away at the age of 69.

On TV, people are watching popular shows such as "Prison Break", "Community", "Game of Thrones" and "Peaky Blinders". Meanwhile, gamers are playing titles such as "The Last of Us", "Grand Theft Auto V", "Batman: Arkham Origins" and "Battlefield 4". Kids and teenagers are watching TV shows such as "Dora the Explorer", "Jake and the Never Land Pirates", "Paw Patrol" and "Every Witch Way".

Celebrities, historical figures and notable people who were born on the 24th of February.

Barack Obama was the President of the United States on February 24th, 2014.

David Cameron was the Prime Minister of the United Kingdom on February 24th, 2014.

Enter your date of birth below to find out how old you were on February 24th, 2014.

Here are some fun statistics about February 24th, 2014.