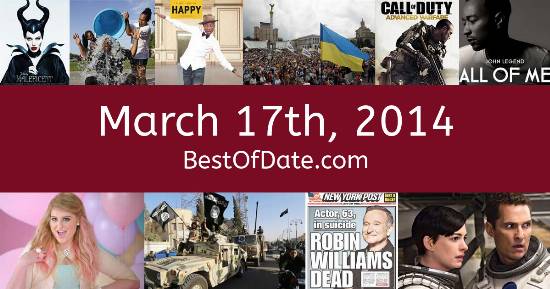 Songs that were on top of the music singles charts in the USA and the United Kingdom on March 17th, 2014.

The date is March 17th, 2014 and it's a Monday. Anyone born today will have the star sign Pisces. Spring has arrived and the days have become longer.

It's St. Patrick's Day, which means that a sizeable amount of people are spending their day in bars. Parades are being held in major cities throughout the world. In America, the song Happy by Pharrell Williams is on top of the singles charts. Over in the UK, My Love by Route 94 featuring Jess Glynne is the number one hit song.

Barack Obama is currently the President of the United States and the movie Mr. Peabody & Sherman is at the top of the Box Office. In the United Kingdom, David Cameron is the current Prime Minister. Video rental stores such as Blockbuster are continuing to close their doors at the moment. This is due to the increasing popularity of online streaming services such as Netflix and Hulu.

Malaysia Airlines Flight 370 recently disappeared from radar and there has been zero trace of the missing aircraft despite a widespread search. If you were to travel back to this day, notable figures such as Peaches Geldof, The Ultimate Warrior, Robin Williams and Richard Attenborough would all be still alive. On TV, people are watching popular shows such as "How I Met Your Mother", "Community", "Modern Family" and "Rick and Morty".

Meanwhile, gamers are playing titles such as "The Walking Dead", "Dota 2", "Saints Row IV" and "Pokémon X and Y". Children and teenagers are currently watching television shows such as "The Fairly OddParents", "WordGirl", "Team Umizoomi" and "Lab Rats: Bionic Island". If you're a kid or a teenager, then you're probably playing with toys such as the Wii U, the Furby Boom, the Xbox One and Frozen dolls.

If you are looking for some childhood nostalgia, then check out March 17th, 2020 instead.

Wrestler. Deceased
Born on March 17th, 1975
He was not alive on this date.

Barack Obama was the President of the United States on March 17th, 2014.

David Cameron was the Prime Minister of the United Kingdom on March 17th, 2014.

Enter your date of birth below to find out how old you were on March 17th, 2014.