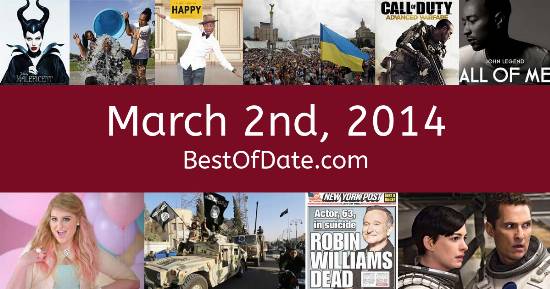 Songs that were on top of the music singles charts in the USA and the United Kingdom on March 2nd, 2014.

The date is March 2nd, 2014 and it's a Sunday. Anyone born today will have the star sign Pisces. Currently, people are enjoying their weekend.

Spring has started to creep in and the days are beginning to get longer. In America, the song Dark Horse by Katy Perry featuring Juicy J is on top of the singles charts. Over in the UK, Money on My Mind by Sam Smith is the number one hit song.

Barack Obama is currently the President of the United States and the movie Non-Stop is at the top of the Box Office. In the United Kingdom, David Cameron is the current Prime Minister. A social networking website called Vine is extremely popular at the moment.

It is 2014, so the music charts are being dominated by artists such as Pharrell Williams, Katy Perry, John Legend, Iggy Azalea, Meghan Trainor, Lorde and Jason Derulo. A new Internet slang phrase called "Sliding into your DMs" is becoming popular at the moment. Matthew McConaughey has just won an Oscar for his role as Ron Woodroof in the movie Dallas Buyers Club.

On TV, people are watching popular shows such as "Community", "Suits", "Homeland" and "Peaky Blinders". Meanwhile, gamers are playing titles such as "ARMA 3", "Battlefield 4", "Assassin's Creed IV: Black Flag" and "Rust". Children and teenagers are currently watching television shows such as "Dora the Explorer", "Jake and the Never Land Pirates", "Jessie" and "Every Witch Way".

A Spotify playlist of songs from 2014. Let us bring you back to the peak days of Pharrell Williams, Katy Perry, Sam Smith and Sia.

Barack Obama was the President of the United States on March 2nd, 2014.

David Cameron was the Prime Minister of the United Kingdom on March 2nd, 2014.

Enter your date of birth below to find out how old you were on March 2nd, 2014.

Here are some fun statistics about March 2nd, 2014.

Leave a comment and tell everyone why March 2nd, 2014 is important to you.