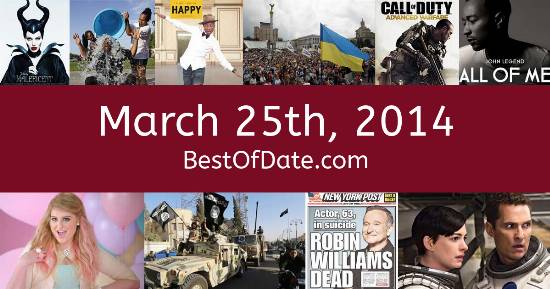 Songs that were on top of the music singles charts in the USA and the United Kingdom on March 25th, 2014:

The date is March 25th, 2014 and it's a Tuesday. Anyone born today will have the star sign Aries. Spring has arrived and the days have become longer.

In America, the song Happy by Pharrell Williams is on top of the singles charts. Over in the UK, Tsunami (Jump) by DVBBS and Borgeous featuring Tinie Tempah is the number one hit song. Barack Obama is currently the President of the United States and the movie Divergent is at the top of the Box Office.

A new Internet slang phrase called "Sliding into your DMs" is becoming popular at the moment. Malaysia Airlines Flight 370 recently disappeared from radar and there has been zero trace of the missing aircraft despite a widespread search. Actor James Rebhorn has passed away after a long battle with skin cancer.

Russia has annexed Crimea following a recent referendum. In response, Russia is suspended from the G8 inter-governmental political forum. In Ireland, Garda Commissioner Martin Callinan has resigned over the recent whistleblower row. On TV, people are watching popular shows such as "Dora the Explorer", "White Collar", "House of Cards" and "Orange Is the New Black".

Meanwhile, gamers are playing titles such as "Grand Theft Auto V", "Battlefield 4", "Dead Rising 3" and "Titanfall". Kids and teenagers are watching TV shows such as "Peppa Pig", "Lab Rats: Bionic Island", "Every Witch Way" and "Sheriff Callie's Wild West". Popular toys include the likes of "The Wii U", "PlayStation 4", "Xbox One" and "Frozen dolls".

Who was the Prime Minister of the United Kingdom on March 25th, 2014?

Enter your date of birth below to find out how old you were on March 25th, 2014.

Looking for some nostalgia? Here are some Youtube videos relating to March 25th, 2014. Please note that videos are automatically selected by Youtube and that results may vary! Click on the "Load Next Video" button to view the next video in the search playlist. In many cases, you'll find episodes of old TV shows, documentaries, music videos and soap dramas.