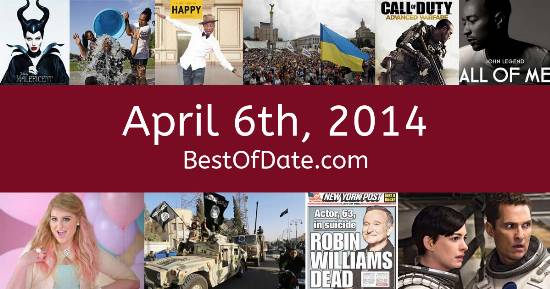 April 6th, 2014 relates to a fictional event in a movie, book, game or television series.

Songs that were on top of the music singles charts in the USA and the United Kingdom on April 6th, 2014.

The date is April 6th, 2014 and it's a Sunday. Anyone born today will have the star sign Aries. Currently, people are enjoying their weekend.

The summer of 2014 is drawing closer and temperatures have started to rise. In America, the song Happy by Pharrell Williams is on top of the singles charts. Over in the UK, She Looks So Perfect by 5 Seconds of Summer is the number one hit song.

Barack Obama is currently the President of the United States and the movie Noah is at the top of the Box Office. In the United Kingdom, David Cameron is the current Prime Minister. Video rental stores such as Blockbuster are continuing to close their doors at the moment. This is due to the increasing popularity of online streaming services such as Netflix and Hulu.

Barack Obama was the President of the United States on April 6th, 2014.

David Cameron was the Prime Minister of the United Kingdom on April 6th, 2014.

Enter your date of birth below to find out how old you were on April 6th, 2014.

Here are some fun statistics about April 6th, 2014.