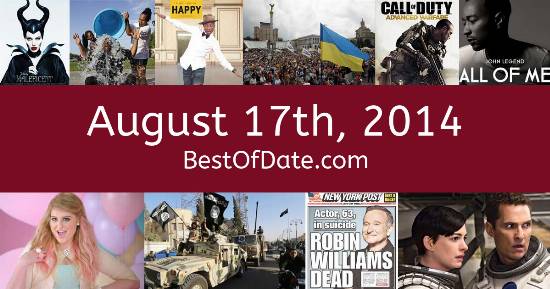 Songs that were on top of the music singles charts in the USA and the United Kingdom on August 17th, 2014.

The date is August 17th, 2014 and it's a Sunday. Anyone born today will have the star sign Leo. Currently, people are enjoying their weekend.

It's summer, so the temperatures are warmer and the evenings are longer than usual. In America, the song Rude by Magic! is on top of the singles charts. Over in the UK, Am I Wrong by Nico & Vinz is the number one hit song.

Barack Obama is currently the President of the United States and the movie Ninja Turtles is at the top of the Box Office. In the United Kingdom, David Cameron is the current Prime Minister. Video rental stores such as Blockbuster are continuing to close their doors at the moment. This is due to the increasing popularity of online streaming services such as Netflix and Hulu.

A social networking website called Vine is extremely popular at the moment. It is 2014, so the music charts are being dominated by artists such as Pharrell Williams, Katy Perry, John Legend, Iggy Azalea, Meghan Trainor, Lorde and Jason Derulo. An activity called the "Ice Bucket Challenge" is currently going viral on social media at the moment. The activity, which is being done to promote awareness of ALS, involves someone having a bucket of ice water dumped over their head.

The Ebola virus epidemic in Western Africa has been receiving around-the-clock news coverage. The world is currently in shock following news that comedian and actor Robin Williams has committed suicide at his home in Paradise Cay, California. The reality TV series "Here Comes Honey Boo Boo" has just been cancelled following reports that cast member June "Mama June" Shannon was recently seen with the man who molested her oldest child.

On TV, people are watching popular shows such as "Dora the Explorer", "White Collar", "American Horror Story" and "Peaky Blinders". Meanwhile, gamers are playing titles such as "Saints Row IV", "Batman: Arkham Origins", "Dead Rising 3" and "Titanfall". Kids and teenagers are watching TV shows such as "Phineas and Ferb", "Doc McStuffins", "Dog with a Blog" and "Every Witch Way".

Popular toys at the moment include the likes of the Wii U, the Furby Boom, the PlayStation 4 and Frozen dolls.

If you are looking for some childhood nostalgia, then check out August 17th, 2020 instead.

Barack Obama was the President of the United States on August 17th, 2014.

David Cameron was the Prime Minister of the United Kingdom on August 17th, 2014.

Enter your date of birth below to find out how old you were on August 17th, 2014.