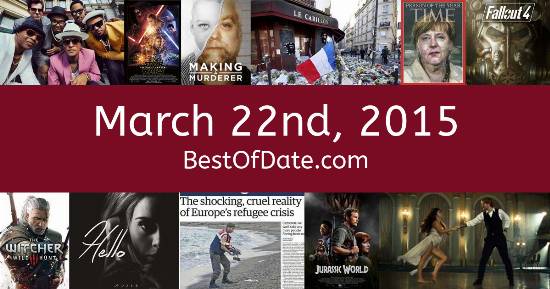 Songs that were on top of the music singles charts in the USA and the United Kingdom on March 22nd, 2015.

The movie "The Divergent Series: Insurgent" was at the top of the box office on March 22nd, 2015.

The date is March 22nd, 2015 and it's a Sunday. Anyone born today will have the star sign Aries. Currently, people are enjoying their weekend.

Barack Obama is currently the President of the United States and the movie The Divergent Series: Insurgent is at the top of the Box Office. In the United Kingdom, David Cameron is the current Prime Minister. A social networking website called Vine is extremely popular at the moment.

Kids and teenagers are watching TV shows such as "Dora the Explorer", "Phineas and Ferb", "Team Umizoomi" and "Dog with a Blog". If you're a kid or a teenager, then you're probably playing with toys such as the Furby Boom, the PlayStation 4, the Xbox One and Frozen toys.

Barack Obama was the President of the United States on March 22nd, 2015.

David Cameron was the Prime Minister of the United Kingdom on March 22nd, 2015.

Enter your date of birth below to find out how old you were on March 22nd, 2015.